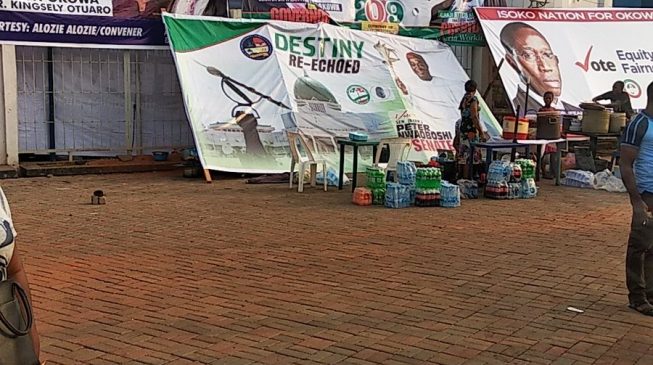 The scoreboard of the Stephen Keshi stadium collapsed on Monday night — only six months after its installation.

The scoreboard was installed during the 2018 African Senior Athletics championship, Asaba 2018.

According to SaharaReporters, the residents of the popular Nnebisi and commuters plying the road narrowly escaped death after the electric scoreboard at the newly commissioned stadium in Asaba, Delta state, collapsed.

Tony Okowa, head of sports commission and younger brother of Ifeanyi Okowa, governor of Delta state, who witnessed the collapse of the electric scoreboard at about 7pm on Monday night told journalists that the scoreboard collapsed as a result of heavy wind.

Delta state sports commission members of staff, as well as others who came for training at the stadium, were seen scampering for safety.

The stadium is billed to host Super Eagles Vs Seychelles 2019 Group D last match as well as the friendly game against Egypt on March 26.

Last week, it hosted the presidential political rally of the People Democratic Party (PDP), in the state.

It also hosted the Aiteo Cup final between Lobi Stars and Rangers International of Enugu.

Members of staff, including others who came for training at the stadium were seen scampering for safety.

It could be recollected that the water tank in the stadium also collapsed during the 2018 CAA championships.