Secondus: Buhari desperate to cling on to power but he is not God 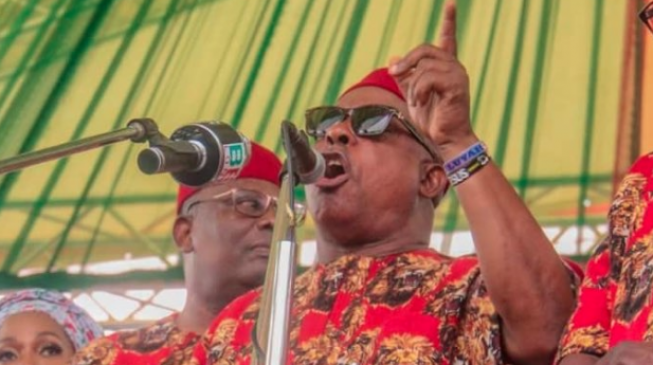 Uche Secondus, national chairman of the Peoples Democratic Party (PDP), says President Muhammadu Buhari is not God, and Nigerians have made up their minds to unseat him.

Reacting to the president’s order to security operatives to deal with election riggers, Secondus said Buhari is desperate to cling on to power.

At the national caccus meeting of All Progressives Congress (APC), the president had said anyone who attempts to disrupt the polls will do that at the expense of his life.

The PDP chairman said Buhari’s statement is a direct incitement against voters which is “the first of its kind in Nigeria.”

“Last Thursday, 48 hours to the rescheduled election the director-general of the Buhari campaign organisation and the minister of transportation, Rotimi Amaechi entered Okirika in Okirika local government area of Rivers state with a troop of soldiers moving like a General commander, ostensibly to scare away voters whom he knew were not going to vote for his party,” Secondus said.

“The president’s confirmation that he has directed the service chiefs to kill Nigerians is nothing but a pre determined script hatched by the ruling party to create voter apathy and implement their result replacement plans using thugs protected by the military.

“A commander-in-chief who has been out of action in numerous security challenges in the country particularly needless killings in Benue, Plateau, Zamfara etc and whose regime has recorded unprecedented bloodletting in the country would suddenly wake up threatening brimstone to voters.

“In all democracies world over, elections are civil matter that is usually handled by civil security like Police and wondered why the involvement of our military in this matter when they have enough security challenges to tackle.

“The president’s action is all tailored towards his dictatorial statement to the international media that nobody can unseated him but noted that he is not God as Nigeria people have already decided to unseat him with Atiku Abubakar noting that the voice of the people is the voice of God.”

Secondus urged the international community to note the emerging “undemocratic dispositions and threats” from both the president and the APC.