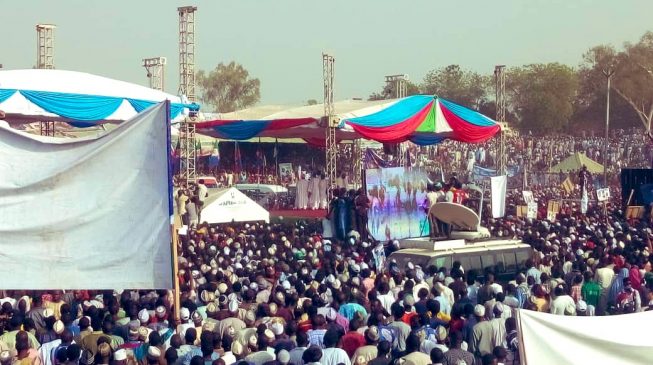 Security operatives shielded President Muhammadu Buhari during an outbreak of violence at the presidential rally of the All Progressives Congress (APC) in Ogun state on Monday.

The president could not end his speech at the MKO Abiola International Stadium, Kuto, Abeokuta, where there was a mammoth crowd.

The rally was brought to an abrupt end after Buhari raised the left arm of Dapo Abiodun, the APC governorship candidate in the state.

Immediately, the president raised Abiodun’s arm, some aggrieved persons threw objects towards his direction, forcing security operatives to form a ring around him.

The aggrieved persons had earlier pelted Adams Oshiomhole, national chairman of the ruling party, with stones and chased supporters of Abiodun from the stadium.

Before the arrival of the president, suspected thugs destroyed the publicity materials bearing Abiodun’s name and pictures. 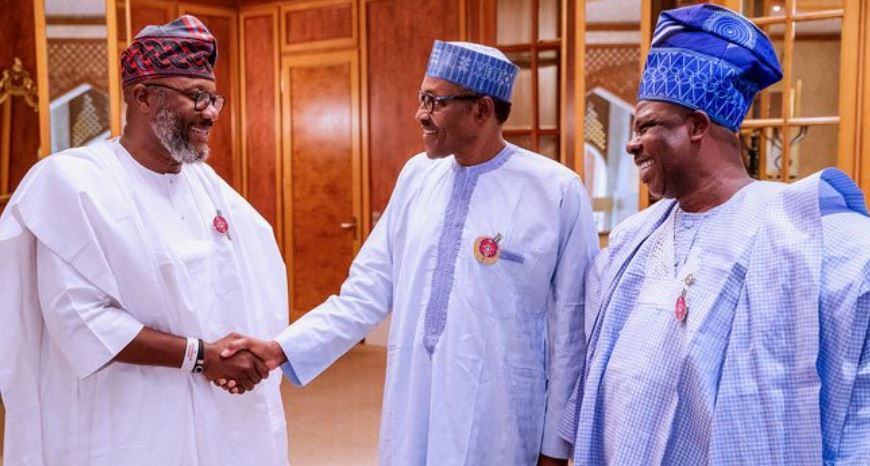 Amosun all smiles as Buhari welcomed Akinlade to Aso Rock.

They also attacked supporters of the governorship candidate who wore yellow T-shirts branded in his name.

Ibikunle Amosun, governor of the state, had lost out in his bid to secure the APC gubernatorial ticket for Adekunle Akinlade, a serving member of the house of representatives.

The governor had accused Oshiomhole and some APC leaders of working against the interest of the state through the emergence of Abiodun.

He also vowed not to hand over to Abiodun.

Shortly after, Akinlade defected to the Allied Peoples Movement (APM) and Amosun said he was not against his action.

He even took him to the presidential villa where they met with Buhari.