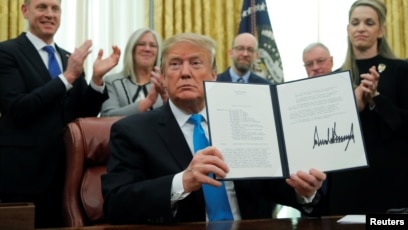 U.S. President Donald Trump displays the "Space Policy Directive 4" after signing the directive to establish a Space Force as the sixth branch of the Armed Forces in the Oval Office at the White House in Washington, Feb. 19, 2019.

PENTAGON — U.S. President Donald Trump signed a directive on Tuesday to outline the establishment of the Space Force as the newest branch of the military.

Space Policy Directive 4, which VOA obtained a copy of ahead of the signing, says the force will adapt U.S. national security “to deter aggression and protect our interest” in space.

“Potential adversaries are now advancing their space capabilities and actively developing ways to deny our use of space in a crisis or a conflict,” the directive states.

Last week, the Defense Intelligence Agency released a report that found China and Russia “have taken steps to challenge the United States" in space by developing weaponized satellites, energy weapons and surveillance networks.

Senior administration officials told reporters in a conference call Tuesday that the Space Force will serve a different security function than the new Space Command, which was directed by Congress and will be established by the Pentagon “in the spring.”

The officials said the Space Force will organize, train and equip troops devoted to space security, while the new combatant command will organize operations and direct combat power, much like U.S. Central Command oversees U.S. combat operations in the Middle East or the U.S. Special Operations Command directs American special operations forces across the globe.

“We need both. I don’t think one will hurt the other,” one senior administration official said.

The directive orders that the Pentagon provide a budget for the new Space Force within 180 days and proposes changes in operational authorities for Space Command within 90 days.

Two U.S. defense officials told VOA the legislative proposal for Congress to create the Space Force is expected as early as next Monday. A draft of that proposal, which VOA has obtained, estimates the Space Force will cost about $73 million per year over five years.

Acting Secretary of Defense Pat Shanahan announced last month that the new force would fall under the Air Force service branch, contrasting President Donald Trump’s calls for a Space Force that is "separate, but equal" to that branch of the military.

Administration officials said Tuesday a completely separate force is “still a goal” in the future, but for now, the administration had heard the concerns of Congress and was most focused on “war fighting.”

“We haven’t abandoned that goal, and in fact, we’re achieving it with this directive, the president’s No. 1 objective, which is a separate armed service,” one senior administration official said.

Congress has the final say over whether the Space Force will become a reality. The Space Force would be the first new military branch since the U.S. Air Force was established out of the Army Air Corps in 1947.It will be organized much like the Marine Corps is organized under the Navy.