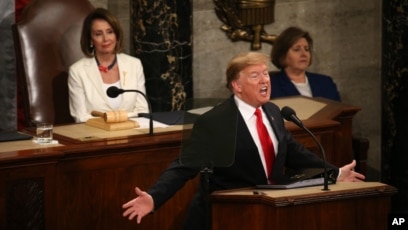 Speaker of the House Nancy Pelosi (D-CA) watches as U.S. President Donald Trump delivers his second State of the Union address to a joint session of the U.S. Congress in the House Chamber of the U.S. Capitol on Capitol Hill in Washington Feb. 5, 2019.

U.S. allies have given a cautious welcome to the announcement of a second summit between President Donald Trump and North Korean leader Kim Jong-un, to be held later this month in the Vietnamese city of Da Nang.

The planned meeting was the major foreign policy announcement Tuesday in President Trump’s State of the Union address. He said the rapprochement with Pyongyang, which began with a summit in Singapore last June, was a major success of his presidency.

“Nuclear testing has stopped, and there has not been a missile launch in more than 15 months,” Trump told lawmakers and guests gathered on Capitol Hill.

To audible gasps from some in the audience, Donald Trump said America would likely be at war with North Korea if his Democrat rival Hillary Clinton had won the presidency in 2016. His claims of success in negotiations with Pyongyang are disputed, says Leslie Vinjamuri, head of the US program at policy group Chatham House.

“There hasn’t been the kind of progress with North Korea that the president’s claiming. There’s still evidence that they are committed to their nuclear program.”

A spokesperson for the South Korean president said, “We hope that the two leaders take more specific and practical actions in Vietnam.”

“I would imagine that there are many people in South Korea who are concerned at this point that perhaps Donald Trump might continue that withdrawal process, and talk about bringing American troops home from the Korean peninsula, in exchange for any nuclear agreement.”

“We have spent more than $7 trillion in the Middle East. As a candidate for president, I pledged a new approach. Great nations do not fight endless wars,” he told lawmakers.

He added that peace talks with the Taliban in Afghanistan must be given a chance, and the Islamic State terror group had been largely defeated in Syria.

But there are growing concerns among allies over an American withdrawal from the region, says Leslie Vinjamuri.

“As to whether you can really rely on the Taliban to deliver on any peace settlement that might be agreed, certainly a lot of concern by women in Afghanistan and what that would mean. And again the same line that he’s going to pull America’s troops out of Syria and there’s very grave concern there about what the implications for stability in Syria, for ISIS, whether that threat will grow.”

Trump criticized Moscow’s purported violation of the Cold War-era Intermediate-Range Nuclear Forces (INF) Treaty, from which the United States and Russia have pulled out recently, and warned if there is no new agreement "the U.S. would outspend and out-innovate all others."

NATO allies are fearful of an arms race with Russia and an unpredictable U.S. president, says analyst James D. Boys.

“It’s notable that he was very critical of European leaders, NATO allies, claiming that they had to be dragged kicking and screaming to their share of defense expenditure for example, and yet spoke quite warmly of people like President Xi from China.”

While the speech appears to have done little to answer questions about foreign policy among European allies, the impression from afar is the State of the Union address was largely aimed at addressing the president’s challenges at home.