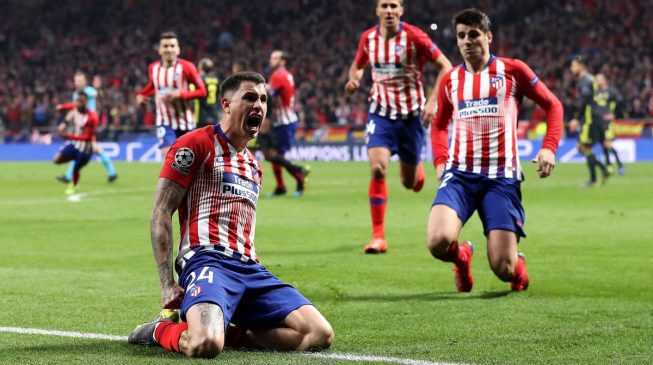 The Video Assistant Referee was the centre of attraction as Atlético Madrid defeated Juventus 2-0 and ten-man Manchester City came from behind to win 3-2.

For all Atletico’s start like raging bulls, the Old Lady of Turin fashioned two good opportunities in the first 15 minutes, Jan Oblak tipping over Cristiano Ronaldo’s free kick while Leonardo Bonucci headed wide from a corner kick. The game went back into pensive mode afterwards but they almost surprised the Biaconneri ten minutes later.

The Rojiblancos broke through Diego Costa who dived into the box after being tripped just outside the box. The referee pointed for a penalty kick but VAR correctly overturned it for a free kick with which Griezmann stung Szczesny ‘s palms.

Ronaldo was a marked man on his return to Madrid, hounded by both crowd and players, but almost had the last word of the half but could only manage a scuffed shot.

Juventus started the second half on attacking front and were caught at the back. Griezmann freed Diego Costa who held off Bonucci but inexplicably shot wide with only the keeper to beat. Griezmann was next to profit from Juve’s indecision at the back but the French striker’s exquisite lob was met by a wonderful save, Szczesny at full stretch to tip it onto the bar and Chiellini cleared.

Atlético, buoyed by their vociferous home support took the initiative and thought they had scored through substitute, Alvaro Morata’s header. The former Juve striker’s wild celebrations was to come to nought as VAR, again, had other ideas. The replay system correctly chalked off the goal for the former Juve striker’s push on Chiellini before getting on the cross.

Atletico would finally break the deadlock 12 minutes from time. Defender, Jose Gimenez swept in the loose ball after Juventus failed to clear a corner kick, VAR powerless on this occasion. Five minutes later, it was 2-0, Godin pouncing on another poor Juve clearance in the box to score on the half-volley.

Ronaldo nearly found an away goal for Juventus but the 33-year-old headed wide at the back post, leaving Juve with a tough task in the second leg in three weeks time.

Manchester City, on the other hand, survived VAR, two penalties and a red card for a last-minute 3-2 win over Schalke 04 in Germany.

Pep Guardiola’s men pounced on a Schalke mistake as they tried to play out from the back. Captain David Silva robbed the ball off Salif Sane just outside the box and squared for Sergio Aguero to tap into an open net on 18 minutes.

The Germans won a second penalty on the stroke of halftime as Fernandinho held Salif Sane back from getting to a free kick. Bentalab picked the ball up again and roofed his effort, giving Schalke an unlikely 2-1 lead at the break.

Otamendi was sent off in the second half after a second booking, but City equalized five minutes from time through Leroy Sane’s well struck free kick.

City, favourites to win this season’s Champions League, won the game in the last minute, Raheem Sterling pouncing on a defender’s slip before placing his shot beyond the goalkeeper for a deserved winner.