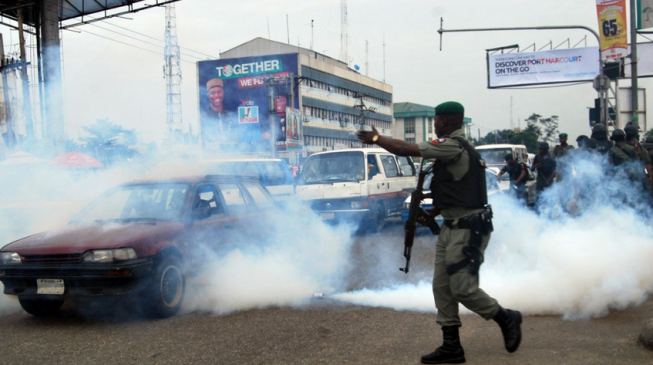 Festus Okoye, INEC’s national commissioner for information and voter education, announced this at a press briefing in Abuja on Saturday.

Okoye said elections in the area would hold on a date yet to be chosen by the commission.

“We have received reports related to incidents in Akuku Toru and Bonny local government areas of Rivers state,” he said.

“We need to harvest where voting did not take place and we’re going to take a position as a commission. In Bonny, there was no election at all. The exercise there has been postponed. It will hold on another day.

In a related incident, Edwin Enabor, INEC spokesperson in Rivers state,  said Okrika LGA was also marred by irregularities, as sensitive materials for a whole ward was diverted.

He said voting could not hold in the affected area and as such new dates would be announced for voters to cast their ballot.

“Voting did not hold in the affected registration area,” he said.

“The position of the commission is that election will be conducted separately for that registration area later.”

Reactions have trailed the violence that broke out in the state with many on Twitter saying that they are not surprised by the tension the elections generated.

“The violence in #Rivers is just too much. For an election without the APC on the ballot,” Odogwu Mobi, a Twitter user wrote.

The violence in #Rivers is just too much. For an election without the APC on the ballot.

Sele Ijewere, another Twitter user, wrote: “As long as Lagos and Rivers state empower hooligans, there will always be election violence. This shit needs to stop. It’s not a do or die affair. The goal is a better life for the pple.”

As long as Lagos and Rivers state empower hooligans, there will always be election violence. This shit needs to stop. It’s not a do or die affair. The goal is a better life for the pple.

Rivers recorded the highest incidents of violence across the country and the All Progressives Congress (APC) and the Peoples Democratic Party (PDP) have been trading blames over this.

According to NAN, over 20 gunmen stormed  ward 2, unit 8 in Ubima, village of Rotimi Amaechi, minister of  transportation, in Ikwerre local government area of the state.

“Trouble started when the gunmen started heavy shooting in parts of Abonnema from Friday night. Before morning, it became obvious that both INEC ad-hoc personnel, intending voters and election materials were at risk,” Chris Finebone, spokesman of APC in the state, said in a statement.

“Reports monitored by APC Situation Room revealed that the shooting by PDP thugs moved to other parts of Abonnema making it impossible for any form of voting process to take place.”

Earlier in the day, Mowan Etete, a former council chairman of the All Progressive Congress (APC) was shot dead in Adoni LGA of the state.

Three other victims identified as Ignatuis, an ex-official member of APC in Rivers, as well as Etete’s cousin and sibling were also killed during the attack.

Omoni said investigations were underway to bring the perpetrators to book.