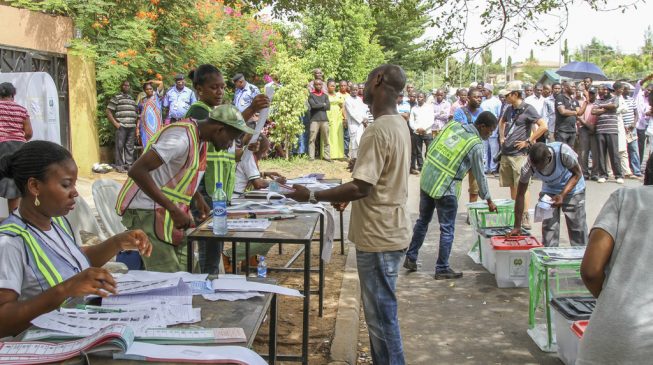 On Saturday, Nigerians will be going to the polls for the presidential and national assembly elections.

Seventy-three political parties filled candidates for the presidential election, though a number of candidates have pulled out of the race. There are also many parties contesting the 109 senate seats and 360 positions at the house of representatives.

Below are basic things to know regarding the elections:

According to the Independent National Electoral Commission (INEC), polling stations will open for accreditation and voting from 8am to 2pm. However, voters in the queue before the close of poll at 2pm will be accredited and allowed to vote.

Unlike in the past when voting is usually delayed, in some cases till 12pm, each voter will vote immediately he or she is accredited.

WHO CAN PARTICIPATE IN THE VOTING PROCESS?

Any prospective voter must be a Nigerian citizen, be 18 years and above, possess a permanent voter card (PVC) and be in the voter register where he/she is assigned to vote

INEC says no one will be allowed to vote at a polling unit other than the one where he/she registered and got accredited.

The accreditation process shall comprise reading of the permanent voter’s card (PVC) and authentication of the voter’s fingerprint using the SCR; checking of the Register of Voters and inking of the cuticle of the specified finger of the voter.

Upon being accredited, an INEC official will confirm if your PVC is genuine using the card reader and that you are listed in the voters register. Your name will be ticked and your finger will be inked; the presiding officer will stamp, sign and endorse your ballot paper after which you stain your finger with the ink given and mark the box for your preferred candidate/party. You will then roll the ballot paper and leave the voting cubicle to drop the ballot paper in the ballot box.

You can choose to leave the polling unit or decide to stay back, but peacefully, to watch the whole process up till the collation of results.

ON THE USE OF PHONES:

INEC banned the use of phones at the voting cubicles. So while you have your phone within the polling unit, you must put it away when you get to the voting booth. This is to curb vote buying.

ON THE USE OF SMART CARD READERS:

INEC is insisting on the use of card readers to vote. The commission had said in the case where a smart card reader malfunctions, voting will be suspended till a new card reader arrives, or postponed till the next day if a replacement is not available by 2pm.

ANY CHANCE THEY COULD BE MANIPULATED?

INEC said the card readers are configured to specific polling units and only open for use at 8am on election day and automatically shut down by 10 pm “in order to forestall any illegal use before the appointed time of elections.”

WHEN A REGISTERED VOTER CANNOT VOTE:

In its election guidelines, INEC listed some cases where a voter is not eligible to vote in a particular polling unit, even though they may be in possession of a PVC.

According to the guidelines, “where a voter’s PVC is read but the name of the voter is not on the Register of Voters, APO II shall refer the voter to the PO or APO (VP) who shall politely request the voter to leave the Polling Unit.

“(d) In the event that the PVC fails to be read by the Smart Card Reader, the APO I shall refer the voter to the PO or APO (VP) who shall politely request the voter to leave the Polling Unit.

“Any person who presents the PVC of another person with an intention to use it to vote, shall not be allowed to vote and may be liable to arrest and prosecution.”