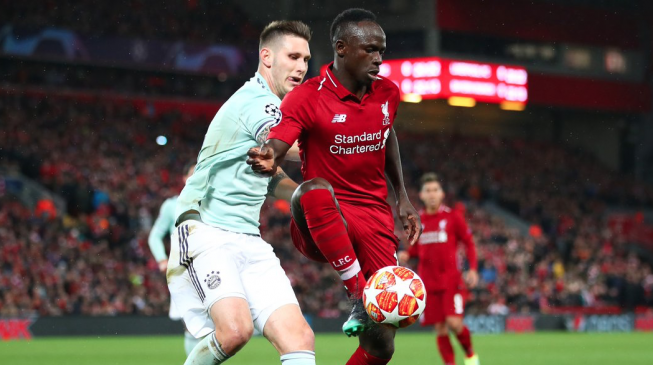 Liverpool played out a 0-0 draw at home against Bayern Munich in the first leg of their UEFA Champions League Round of 16 tie — no thanks to a wasteful attack.

The Merseyside club’s major worry before this encounter was the absence of centre back pairings, Virgil van Dijk and Dejan Lovren, due to injuries, but Jurgen Klopp would need to work out how is much-feared attack could not breach Manuel Neuer’s goal despite creating several chances.

In a frenetic first period, Liverpool were full of energy and kept their German opponent on their toes till the half time whistle.

Gegenpressing is Klopp’s ultimate weapon against teams that love playing out of defence, and they laid down the marker from the off, with most of their chances created from winning the ball deep in Bayern’s half.

Mohamed Salah got behind the defence in the 23rd minute but his toe-poke on the stretch was straight at Neuer.

Alisson was next to get caught while playing out from the back but Kingsley Coman hit the side netting. In a half that looked scrappy at times due to aggressive pressing from both sides, Liverpool took control as it wore on and created three good chances before the break.

First, Salah headed wide at the back post, Mane then shot wide from a fortuitous golden chance and also directed another overhead kick well wide.

Stand-in defender, Joel Matip’s shot was, however, blocked few yards out while Firmino could not locate a Red shirt in the area as Bayern went into the break level thanks to the profligacy of Mane, Salah and co.

Liverpool started the second half like the first but at a reduced tempo, the first real chance not arriving until the 52nd minute and it fell to Bayern Munich, Sergi Gnabry’s rising long-range shot narrowly clearing the bar.

The former Arsenal youngster also shot well wide on 75 minutes as both teams looked clumsy on and off the ball.

The first shot on target- and best chance- in the second half didn’t arrive until six minutes from time, but Saido Mane’s diving header was expertly parried for a corner kick.

The Bavarians ensured they avoided defeat with some time-wasting, and the final whistle made this the third consecutive goalless draw between both teams at Anfield, and with all to play for at the Allianz Arena in Germany.

It was also a 0-0 affair at the other game of the night in France between Olympic Lyon and Barcelona. Both sides created several opportunities but could not convert.

Messi, Suarez, Dembele, Busquets and Alba were all thwarted by Anthony Lopes in goal for Lyon. Lyon struck the bar in the first half but did not create enough in the second half despite getting into good positions.

The Catalans would look to finish off the tie at Camp Nou in the second leg.