We are bound to obey Buhari, Buratai replies Atiku 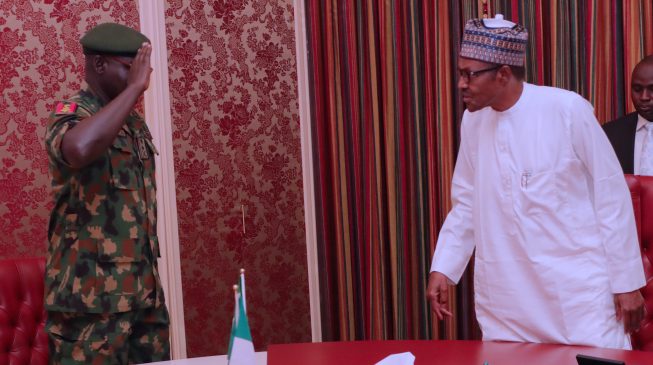 Tukur Buratai, chief of army staff, says the army is bound to obey orders from constituted authorities, dismissing Atiku Abubakar’s call for the military not to obey President Muhammadu Buhari.

On Monday, Buhari directed security operatives to deal ruthlessly with those who might want to snatch ballot boxes during the elections.

Reacting, however, Atiku, candidate of the Peoples Democratic Party (PDP) in the election, said the directive is inconsistent with the laws of the land and military commanders were not meant to obey such order irrespective of the status of the person who issued it.

But while briefing army commanders and principal staff officers on Wednesday, Buratai said it was strange that some persons seeking to rule the country could incite the military into violence.

Although, he did not mention Atiku’s name, it was clear he was referring to the PDP candidate.

Re-echoing Buhari, Buratai said those who try to interfere with the electoral process must be dealt with appropriately.

“One of our core values is loyalty to constituted authority. It is unfortunate to hear persons who are aspiring to rule this country are inciting the army to disobedience,” he said.

“We have consistently stated our position in the political dispensation to remain neutral and apolitical. However, direct and public incitement of the Nigerian Military against democracy and constituted civil authority will not be tolerated.

“I request such persons to withdraw this inciting statement. Let me reemphasize loud and clear, that the Nigerian Army is a professional army. The foundation of military professionalism is discipline and without discipline an army cannot stand. Loyalty must be hundred per cent.  I shall leave you in no doubt as to our resolve to bequeath a professionally responsive army to Nigeria and Nigerians.

“Should any officer or soldier have doubts as to his loyalty to the Nigerian state as presently constituted, such a person has up to 22 February 2019 to resign. There is no room for indiscipline or disobedience to lawful orders in the army today.”

The army chief said commanders must work with all stakeholders, interest groups and agencies to avert any act by any individual, groups or entities that seek to undermine the democratic process.

He also announced the activation of operation Safe Conduct which is aimed at ensuring a peaceful conduct of the elections holding February 23, and March 9.

Earlier, Sagir Musa, army spokesman, had told TheCable that the army’s actions would be guided by the rules of engagement during the general election.