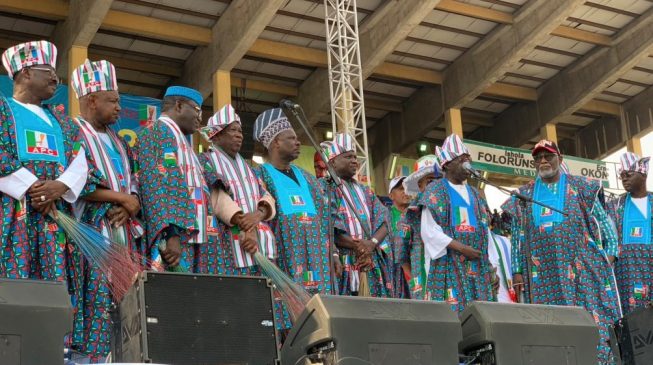 Bola Tinubu, a national leader of the All Progressives Congress (APC), on Saturday told party supporters to vote using their index finger during the February 16 presidential election.

Tinubu took voting education to the supporters of the party who gathered at the Teslim Balogun stadium, Sululere, for the mega rally of APC presidential campaign.

The elder statesman told the people not to use their thumbs in order to avoid spilling ink on the space meant for other parties, thus voiding their votes.

He explained that with over 70 presidential candidates printed on the ballot paper, there will be little space allocated to each party.

Tinubu further told supporters to arrive at their polling booths early, taking with them sandwiches including beans cake and roasted plantain.

He added that should they encounter problems with their fingerprints, they should keep trying until it is recognised.

“Give your PVC to them, if they say it can’t capture your fingerprint, try again. If it rejects you, try again. Don’t leave. It’s your right.

“But to print seventy something ballot, you know the space will now become small, so don’t use this thumb, don’t use it. We are in the classroom of voting. Use this finger, index finger. Use the finger you use to lick soup.

“Go to that ink, and go to that space and put it, blow it. Look for broom symbol o, don’t put it on top of the broom. That will be a void vote. Put it in that small space and leave and stand by until they count your vote. Because if you use your thumb finger, it will spill over to another line. They said they will void the vote. If you use too much ink, a blot to another party creates a problem.”

He encouraged the people to come out en masse and vote for candidates of the APC at all levels.