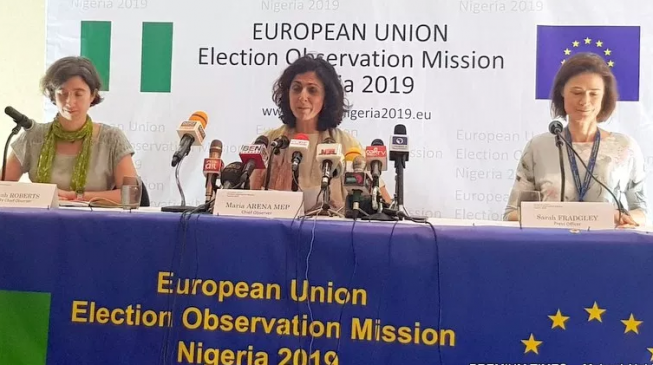 The European Union Election Observation Mission (EU EOM) has replied Nasir el-Rufai, governor of Kaduna state, over a threat he issued to foreigners on the forthcoming elections.

The governor had said foreigners who intervene in the election would leave in “body bags”.

Responding through a statement on Wednesday evening, EU EOM said its observers would not be deterred from doing their work.

It said it had been involved in all Nigerian elections since 1999 and this year will not be an exception.

“We are aware of the comments by the Governor of Kaduna about non-interference by foreigners during a talk show on the elections Tuesday 5 February,” the statement read.

“The Independent National Electoral Commission invited the EU to deploy an observation mission for the 2019 general elections.

The EU said its observers will continue to do their work -in the run up to, and after the elections -while their security remains under constant review.

“While the security of EU observers is of paramount importance, and will remain under constant review, EU observers will continue their work across the country in the run-up to – and beyond – the 16 February elections,” the statement read.

“For the last month the mission’s team in Abuja, as well as 40 long-term observers across the country, have followed the elections.

“We have met with a wide range of candidates, parties, election officials, security agencies, and civil society organizations, and have enjoyed good cooperation at federal and state levels.

“The mission looks at all aspects of the election, including the campaign tone, the transparency of the election administration, the neutrality of security forces, and the independence of the judiciary.”

El-Rufai’s comment had sparked an outrage, with the Peoples Democratic Party (PDP) calling on the international community to impose travel ban on the governor.

But clarifying his position, in a statement by Samuel Aruwan, his spokesman, El-Rufai dismissed the criticisms, saying he was defending Nigeria’s dignity.