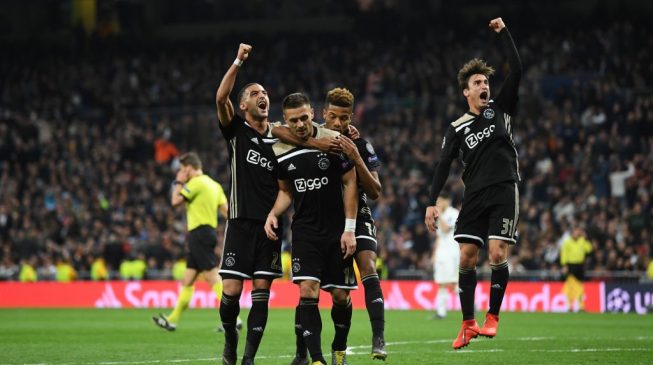 Ajax dismantled an abject Real Madrid 4-1 at the Santiago Bernabeau to qualify for the quarter-finals on the UEFA Champions League for the first time in 22 years at the expense of the defending champions.

Real Madrid, who finished the game with ten men due to a late sending off, had won the competition thrice on the bounce and had captured four titles in the past five season, but they were torn to shreds by a youthful and enterprising Ajax team who fearlessly attacked their more illustrious opponent.

The 1995 UCL winners, Ajax, were the last club to win at Real Madrid’s home stadium (1995), and they repeated the trick thanks to the brilliance of the team, especially midfielder, Dusan Tadic.

Los merengues nearly took the lead in the fourth minutes, defender, Raphael Varane, hitting the post with a header, but moments after, Ajax punished them.

Real Madrid switched off on a throw-in and Ajax pounced through Dusan Tadic. The midfielder skilfully evaded Casemiro before sliding a pass through to Hakim Ziyech, and the striker finished with aplomb.

The youthful Ajax side was not allowing Madrid any fluency in midfield, and with a defence lacking suspended Sergio Ramos’ leadership, the Dutch team doubled their lead eleven minutes later.

Again, Tadic was the creator as his Barca-esque pass parted the shaky Madrid defence for young Brazilian winger, David Neres to finish off the job.

Santiago Scolari’s team was at sixes and sevens in an abject first half that was uncoordinated and sloppy, a characteristic feature in recent matches. Both Lucas Vasquez and wonderkid, Vinicius Junior, a crowd favourite, went off in tears, injured, but Bale hit the bar going into halftime.

Despite being two up, a spirited Ajax side continued from where they stopped before the interval, and made it 3-0 on 62 minutes through man-of-the-match Tadic. The Serbian scored a goal his performance deserved, curling in brilliantly from the edge of the area to all but seal the famous win.

Asensio pulling a goal back on 72 minutes with a left-footed shot which found the bottom corner, but Ajax restored their three-goal advantage immediately through a free kick by Lasse Schone which erratic goalkeeper, Thibaut Cortouis got all wrong. Defender, Nacho crowned a rotten night for Real with a red card on 90 minutes for pushing a player in the face.

The win means Ajax have defeated Real Madrid for the first time in eight attempts, and have also won a UCL knockout game first time in 22 years, while defeat for Real means their record run of reaching eight consecutive UCL semi finals is over.

In the other game of the night, Borussia Dortmund peppered Tottenham’s goal all night but the English club stole a 1-0 win via Harry Kane’s well-tablet goal to hand Spurs a 4-0 aggregate win and passage into the quarter finals.