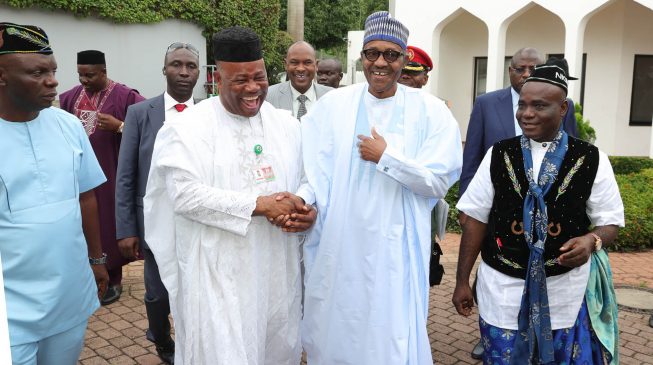 Despite losing his bid to return to the senate, Godswill Akpabio, senator representing Akwa Ibom north-west, says the Peoples Democratic Party (PDP) lost the presidential election the day he joined the All Progressives Congress (APC).

The former senate minority leader joined the ruling party in August, with APC celebrating his decision to quit the opposition party.

Some political pundits had said one of the reasons APC flagged off its presidential campaign in Akwa Ibom was because of the influence Akpabio commands.

He had also boasted that he would deliver Akwa Ibom for Buhari but he could neither fulfil the promise or secure his seat.

But speaking in an interview with Channels Television‘s Seun Okinbaloye, Akpabio said “My former party lost from the day I stepped out of it.”

Akpabio said the PDP became lighter when he moved to the ruling party with thousands of his supporters.

He said this depleted the PDP’s numbers and by extension its chances of winning the elections.

The former governor of Akwa Ibom however, noted that the PDP would not have been able to defeat Buhari even if he was there because Nigerians wanted continuity.

“I believe strongly that the president needed to be re-elected,” Akpabio said.

Speaking about his loss at the senatorial poll, Akpabio said he was robbed.

“Those responsible, whether the REC in Akwa-Ibom state or those he instructed know the reality, my plea now is that they should announce my result,” he said.

“The reality is that I am asking for justice. I am saying that INEC should be bold enough to do the right thing.

“I am disappointed that a state with so much followership as far as the party is concerned, the state that loves President Buhari so much was not allowed as a result of a conspiracy to bring out the votes.”