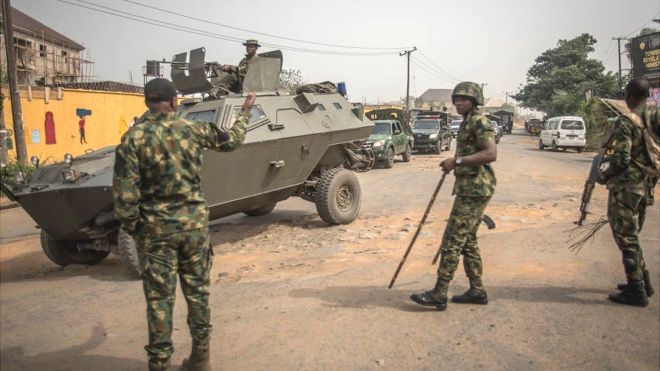 The Nigerian army says the Independent National Electoral Commission (INEC) is unfair with the report of its findings on the governorship and house of assembly elections in Rivers state.

Following reported cases of widespread violence during the elections, INEC suspended electoral process in the state and sent a fact-finding committee on investigation.

Festus Okoye, INEC’s director of information and voter education, had said the committee confirmed military’s intervention in the elections, but could not say if their involvement was to rig.

In a statement on Monday, Aminu Iliyasu, a deputy director of public relations with army’s 6 division, said none of the army’s side of the story was made public in INEC’s findings.

“Headquarters 6 Division Nigerian Army (NA) have observed with dismay and sense of betrayal in the statement made by the Independent National Electoral Commission (INEC) signed by its National Commissioner and Chairman Information and Voter Education Committee Festus Okoye Esq on 15 March 2019,” Iliyasu wrote.

“The statement according to INEC was the findings of its Fact-Finding Committee that assessed the situation in Rivers State.

“It is however pertinent to note that, representatives of the 6 Division met with the Fact-Finding Committee on Tuesday 12 March 2019 at the INEC Headquarters in Port Harcourt and had honest discussions and made a written submission to aid the Committee in its task. Regrettably, none of the Division’s input form any of the findings of INEC as made public. This clearly indicates lack of trust by an institution that the NA sacrifices so much to assist in the course of performing their role.”

He alleged that the security aides of Nyesom Wike, the governor, and “armed thugs” attacked some soldiers on the day of the election.

He added that the ifficers who sustained injuries in the incident were still in the hospital.

“What INEC failed to mention or even consider is the fact that at about 10:30 pm on Saturday 9th March 2019, troops of 6 Division NA detailed at the outer perimeter of Obio/Akpor Local Government Headquarters Collation Center were brazenly attacked by Governor Wike’s security aides and armed thugs who stormed the collation center with the Governor in a convoy of more than 50 vehicles while collation of results was going on,” he said.

Election materials, according to the army, were then carted away and electoral officials abducted by the governor’s “thugs” to an unknown destination.

The army said this was made known to the INEC fact-finding committee and wondered why INEC didn’t see it worth condemning or mention in its report.

The army also expressed its disappointment with the Rivers state police command, asking the police leadership to commence full-scale investigation of those security aides attached to Wike who attacked army troops at the Obio/Akpor local government area headquarters, shooting some its personnel.