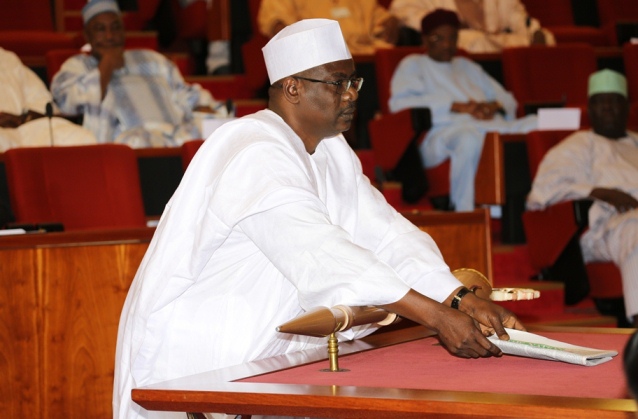 Borno state elders under the platform of Concerned Citizens of Borno have recommended Ali Ndume, lawmaker representing the state’s south senatorial district, for the position of the next senate president.

Speaking on behalf of the elders at a press briefing, Dauda Danladi, leader of the group and Nigeria’s former ambassador to Pakistan, said Ndume should be considered for the position being a loyal member of the All Progressives Congress (APC) and one who possesses the qualities and experience to lead the senate.

He said the lawmaker had contributed immensely to the development of the nation.

“There is no doubt that the 9th national assembly has a critical role to play if government is to actualize all its developmental projects, programs and policies that will propel Nigeria into the industrialized world in the near future,” he said.

“Hence a cooperative partnership driven national assembly that will support, encourage and work with the executive to accelerate the achievement of socio economic objectives of the Government cannot be overemphasized.

“It is in this regard that we the Concerned Citizens of Borno are coming forward to urge Senator Mohammed Ali Ndume to contest for the office of the president of the senate in the 9th national assembly.

“We are convinced that Senator Ndume possesses all the qualities and requirements to hold the office of the senate president being a loyal party man and a ranking senator.

“His stint as a lawmaker in both chambers of the national assembly from 2003 to date are there to speak for themselves, where he stood firm in the cause of his people and contributed immensely in debates and passages of people-oriented bills and motions.”

Danladi also said another reason the senator should be elected is that the region where Ndumi hails from gave President Muhammadu Buhari the second highest votes in the election.

He said giving the state a chance to produce the senate president will fast track the rehabilitation of internally displaced persons (IDPs) in the region.

“In the run up to the 2019 elections, he was appointed as the north/east zonal director for the APC presidential campaign council,” he said.

“In all of the above, Senator Ndume put in his best to achieve the desired results. It is for these and many more reasons that we are recommending this illustrious son to Nigerians.

“Our plea for the distinguished senator to seek for the office of the president of the senate is premised on the fact that the north/east geo-political zone where he hails from gave the president the second highest vote cast.

“This is in addition to the fact that the region has been ravaged by insurgency from 2009 until the coming of this administration in 2015.

“Borno state being the epicenter of the crises deserves serious attention. The office of the president of the senate will therefore offer the state a good opportunity to fast track reconstruction, rehabilitation and resettlement of millions of displaced persons.

“It will also be apt to add that Borno state has the highest percentage of 92% of votes cast for President Buhari in the just concluded 2019 election.”