Borno monarch: I slept in makeshift tent to encourage my people to return home 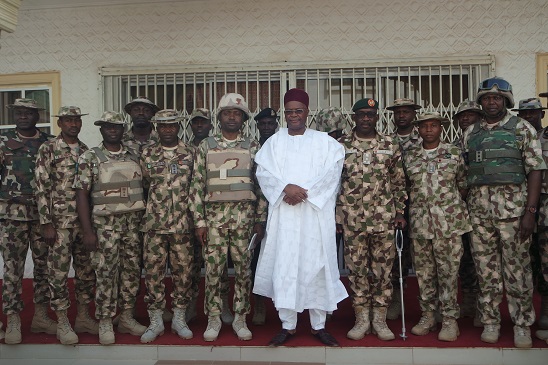 Abdullhi Ibn-Muhammed, emir of Akira-Uba in Borno, says he slept in a tent for many weeks to build confidence and encourage his people to return home after the town was freed from Boko Haram control.

Ibn-Mohammed said this when Bulama Biu, acting-general officer commanding (GOC), 7 division of Nigerian Army, paid him a courtesy visit at his palace in Uba, on Saturday.

The monarch said when the insurgents sacked the town in 2014, his people fled to different places.

“When the town was reclaimed by the military, I took courage to return back to my palace along with the members of my traditional institution,” he said.

“Despite all these challenges, we came back and stayed. Some of us were taking shelter in makeshift tents. I slept in my burnt palace. And sometimes when it rained, we have to put ourselves together in one place and cover ourselves.”

The monarch commended the efforts and sacrifices of the military in safeguarding the peace, security of the country.

“It is because of the commitment you have given towards ending the lingering crisis of Boko Haram that we are enjoying relative peace in our community,” he said.

“We in Akira will always thank you for making it possible for us to come back home. It is a well known fact that fighting insurgency is a difficult task. It is very difficult because you don’t always know where the next attack will come from but the army has done tremendously well and lived up to expectation.

“War cannot be completely won within the short period of time. It requires continuous efforts of mobilisation, fighting, sensitisation, enlightenment and support from all stakeholders.

“The government needs to continue educating them to drop their arms, embrace peace as well as meaningful reintegration.

“Those taking arms should understand that they cannot fight the government.”

The emir lamented that the insurgents had inflicted “unprecedented damage” to people’s lives and property under the guise of Islam, noting that their actions contradicts what the religion preaches.

Responding, Biu thanked the monarch for all the support he had been providing to the troops of 28 task force brigade.

The GOC said the recent attacks amounted to “a kick of the dying horse”.

He said the army was committed to ensuring lasting peace and sanity in the entire northeast.