Do the Igbo and the Yoruba know they are sons of ‘Oduduwa’? 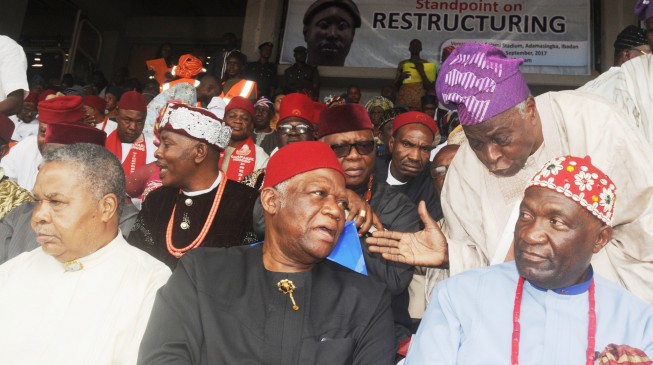 And the Supreme Being commissioned Oduduwa, a “sky-god”, to carry out a terrestrial task; he descended from heaven with a cockerel which had six fingers. And the earth was made by him through the ingenious deployment of his avian subject.  But that was after ‘Atewonro’ had sprinkled some dirt on the ocean to found Ile-Ife.  And he had wives, and sons who founded other kingdoms.  So the mythic origin of the Yoruba says.

In Igbo mythic origin, the Supreme Being sent Eri down to earth to establish balance and social order.  The “sky-god” founded Nri, and he had wives, and sons who founded other Igbo towns and communities.

The Yoruba and the Igbo share a lot more than similar mythic origins. They are the oldest inhabitants of the areas they live in. In other words, the Yoruba and the Igbo are indigenous to the geographical area called “Nigeria”. And it has also been argued that both groups are of a singular ancestry.

The two groups have had established trade-links dating to the period before contact with the first Europeans. And they are known to share passion for industry; are convivial, accommodating and peace loving.

Also, there is no documented history of war between the Igbo and the Yoruba despite occupying the same “southern hemisphere”. In the precolonial times, wars among kingdoms and natives were common, but there appears to be no recorded incident of battle between the clans and kingdoms of the two groups.

In language, they are both of the Kwa-group Niger-Congo origin.  The similarities between the Yoruba and the Igbo language are remarkable, if not uncanny, which point to an identical fount.

Despite having so much in common, politics has been a pesky point of dissonance for both groups. Though the Igbo and the Yoruba do not have a romantic political history; they have kept the dagger away from their rivalry.

The outcome of the Western Region elections of 1951, in which Nnamdi Azikiwe claimed he was sabotaged by Obafemi Awolowo, perhaps laid the molten magma of political rivalry between the two groups.

Some associates of Azikiwe alleged that Awolowo, leader of the Action Group, bought over members of the NCNC, after they had won elections on the platform of the party in the western region, to scuttle Zik’s plan of being the leader of the regional assembly.

However, there is no proof to substantiate these claims. In fact, the allegation regarding Awolowo’s sabotage of Zik was disproved by the colonial government at the time.

So, over the years, stories have been revised and passed down to generations who do not probe the information but hold it as a grudge against the other.

Most young people trading hate on social media cannot actually say their grievance against those they are tugging with, except to echo the refrain of revised stories handed down to them and to act on stereotypes they have been socialised by.

But can the Igbo and the Yoruba ever unite? Yes, they can. And they will. There will come a time when there is no option, but for them to hold each other in a warm embrace as “descendants of sky-gods.”

There will come that time.