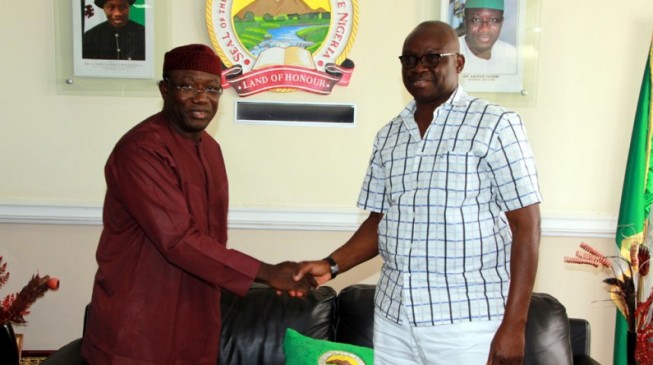 Kayode Fayemi, governor of Ekiti state and Ayodele Fayose, his predecessor, were the cynosure of eyes at a ceremony in honour of Afe Babalola, a revered lawyer and senior advocate of Nigeria (SAN).

Babalola was honoured with the 2018 Obafemi Awolowo Prize for Leadership at an event, which took place at Harbour Point, Victoria Island, Lagos, on Wednesday.

It was attended by dignitaries such as Yakubu Gowon, former head of state, Emeka Anyaoku, former secretary-general of Commonwealth, prominent traditional rulers and politicians.

Fayemi, who delivered a speech, was walking to his seat when Fayose stood to greet him. Responding, Fayemi threw his arms wide open as both men got locked in a warm embrace.

The governor had initially made veiled reference to Fayose, taunting the man he succeeded last year over his “stomach infrastructure” policy.

“I am immensely proud that baba ( Afe Babalola) is from Ekiti. You have restored our values for us. With you around, at least no one can accuse us of being the state of stomach infrastructure. They will definitely regard us as the fountain of knowledge,” he said.

But not minding the criticism, Fayose, who had in the past, attacked the incumbent governor, displayed a rare show of love.

Both men raised their hands in solidarity as sounds of clap and laughter erupted in the hall. The gesture was undoubtedly one of the highlights of the ceremony.

Fayose had described his successor’s victory as pyrrhic, saying his party would work tirelessly until it gets justice.

“We will reclaim the stolen mandate in the court by the power of God. As for me, I am Peter Ayodele Fayose, I hold with my head high. I can never be suppressed. I don’t lose battles and I will not lose this. By the power of God, I will laugh last,” he had said.

The former governor put that aside momentarily at the programme in honour of Babalola.