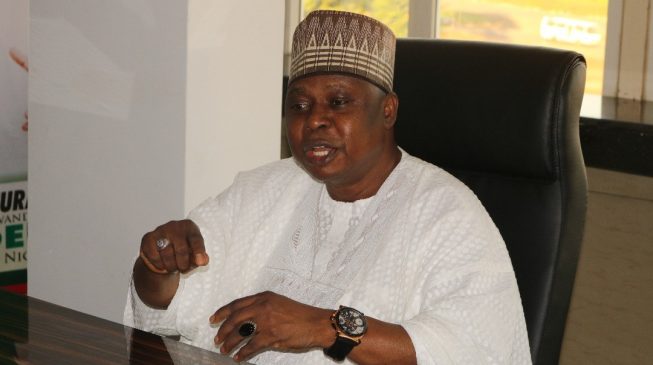 The Economic and Financial Crimes Commission (EFCC) has released Babalele Abdullahi, son-in-law of Atiku Abubakar and finance director of some companies owned by the presidential candidate of the Peoples Democratic Party (PDP).

Abdullahi was arrested on Saturday and released after the anti-graft agency invited Tanimu Turaki, a senior advocate of Nigeria (SAN) leading the defense team of Atiku (pictured), to sign a bail document for him.

But the commission detained Turaki, who is also deputy director-general of the PDP Presidential Campaign Organisation.

Tony Orilade, EFCC spokesman, confirmed his arrest to TheCable on Tuesday but did not give details.

“I heard of it yesterday; but let me get confirmation and the details,” he told TheCable over the phone.

Paul Ibe, Abubakar’s spokesman, told TheCable Turaki is the lawyer coordinating the suit to challenge the outcome of the presidential election.

He added that the suit had been finalised and is supposed to be filed in court on Tuesday.

“He is the one coordinating the team of lawyers, so you should just use your tongue to count your teeth to understand why he has been arrested,” he told TheCable.

“Why is President Muhammadu Buhari and the APC scared of a legal challenge? Why are they mobilising all sorts of people and group to beg His Excellency (Atiku) not to go to court?”

Abdullahi, who has been in EFCC custody over allegations of money laundering, was subsequently freed by the commission after Turaki’s arrest

Reacting via a statement, the PDP said Turaki’s arrest is “part of the grand plot by the Buhari Presidency and the All Progressives Congress (APC) to use state apparatus of power to intimidate PDP leaders.”

The statement issued by Kola Ologbondiyan, the party spokesman, said the development is also to scuttle “PDP’s determination to reclaim our February 23, 2019 Presidential election victory in court.”

“Since the people’s candidate, Atiku Abubakar and the PDP expressed our unwavering determination to reclaim our victory at the tribunal, being armed with overwhelming evidence, our leaders have been subjected to escalated harassments, constant threats, blackmails, cajoling and contrivances by the APC to drop our legal option,” the party said.

“The PDP, however, states in clear terms that the APC and the Buhari Presidency are fighting a lost battle as no amount of harassment and threats will ever make the party to buckle in its determination to take back the mandate, in line with the wishes and aspirations of Nigerians.”