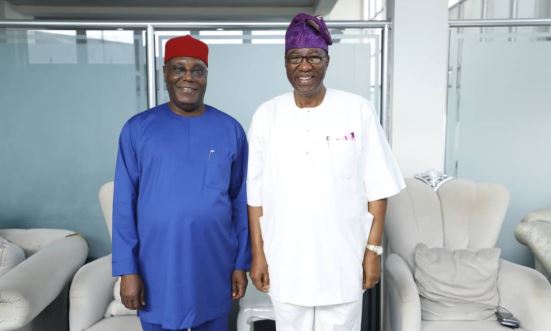 Daniel, two-term governor of Ogun state, had resigned his membership of the PDP on Saturday and announced that he was quitting partisan politics.

After the announcement, Daniel said his supporters were urging him to lead them to the All Progressives Congress (APC).

Commenting on this, Femi Fani-Kayode, a former minister of aviation, said it was sad that Daniel decided to dump the opposition party “before the conclusion of Atiku’s election petition”.

Fani-Kayode also accused Daniel of taking sides with President Muhammadu Buhari After Abubakar was “rigged out”.

“For the 1st DG of @atiku’s PCO and his closest confidante in SW to dump @OfficialPDPNig and join @OfficialAPCNg before the conclusion of Atiku’s election petition is sad.F or a man that was gunning to be SGF in an Atiku govt. to join Buhari after Atiku was rigged out is tragic!,” Fani-Kayode had written on his official Twitter handle.

But in a statement on Tuesday, Daniel said he had not abandoned the former vice-president.

He also denied joining the APC, explaining that he told his followers to “join any political party of their choice”.

“I have not, will not and will never abandon Atiku. Atiku is different from PDP. I have resigned from PDP and lost interest in partisan politics having put in about 20 years of my life in a thankless process,” Daniel said.

“I will commit my God-given resources to help less privileged through my Foundation and will contribute sharing the body of knowledge through our not for profit Political Academy. That will be a thankful process.

“I will continue to support the political process in a non partisan manner. I am clear with my position, without any ambiguity. There is no need to insinuate, speculate, extrapolate, anticipate or draw conclusions on my behalf.

“I did not expect such a simple personal decision can generate such national discourse and for that I remain grateful to God. I am however most grateful to all my friends and well wishers. The phones have not stopped ringing. All the advice are well taken. My very deep appreciation.”