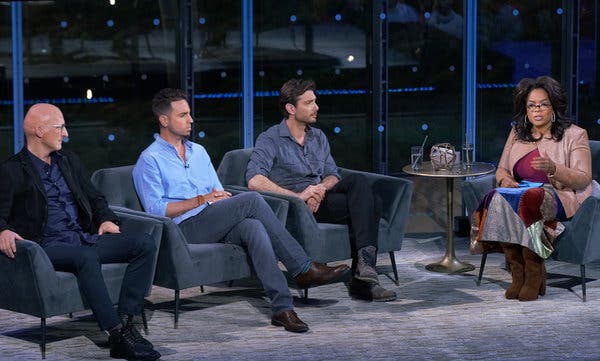 On a recent afternoon, an audience composed mostly of survivors of sexual abuse sat in the Times Center auditorium in Manhattan for a preview screening of Dan Reed’s “Leaving Neverland,” to be followed by a Q. and A. led by Oprah Winfrey. The documentary, which aired on HBO in two parts on Sunday and Monday, profiles Wade Robson and James Safechuck, two men who say Michael Jackson sexually abused them when they were children.

The final hour of the film pivots from the graphic, triggering details of molestation that Robson and Safechuck say occurred for several years to the emotional fallout in their adulthood. At the screening, audience members could be heard sniffling, sighing and crying during moments when Robson and Safechuck spoke of their struggles to come forward to their families.

There were also emphatic cheers and bursts of applause on several occasions, as when Safechuck’s mother, Stephanie, recalls dancing on the day Jackson died and exclaiming, “Oh, thank God he can’t hurt any more children.”

Then, at the conclusion of the viewing, came nearly 90 minutes of processing with Winfrey. The lights came up, the cameras turned on and Winfrey, Safechuck, Robson and Reed ascended the stage to record “Oprah Winfrey Presents: After Neverland.”

The hourlong special, which aired Monday evening on both HBO and OWN immediately following the conclusion of “Leaving Neverland,” was a return to the audience-involved, talk-show therapy format that she perfected over 25 seasons of “The Oprah Winfrey Show.” Winfrey solicited responses from some of the abuse survivors seated before her, and called upon Howard R. Fradkin, a psychological trauma consultant specializing in male sexual abuse, to speak about patterns of grooming and manipulation.

But at the center of those teaching moments were Robson and Safechuck. At first, Winfrey asked them to elaborate on how they came to recognize themselves as victims and seek help, and invited them to unpack the ways in which they say Jackson compelled them into years of silence.

A scene from “After Neverland.”CreditCreditVideo by HBO

Talk eventually turned to suspicions of their motives, and the assertions by superfans and the Jackson family that Robson and Safechuck are only coming forward for financial gain. Reed emphatically denied that either of the men or their families received compensation for the film.

Robson said that a lawsuit he filed against the Jackson estate in 2013 was about doing “something good with this bad,” not about remuneration. He saw the legal system as a “platform” to tell his story in a scenario where the estate would “have to listen” and “have to sit there.”

“Michael trained me and forced me to tell the lie for so many years, and particularly on the stand,” he continued. “And those were really traumatizing experiences for me that had a huge impact on the rest of my life. So the feeling was, I want an opportunity to reprocess that experience. I want to get on the stand again, because now I’m able to tell the truth.”

(Robson’s suit was thrown out by a judgebecause too much time had passed. Safechuck sued the following year and was also unsuccessful. Both cases are under appeal.)

The Jackson family has denied all of the allegations and publicly condemned the film, and the estate is suing HBO for $100 million. Winfrey seemed fully aware of the optics of her interview: “All the anger — you guys are going to get it. You know that, right?”

At various points during the taping, Winfrey mentioned, in passing, her own experience as a survivor of child abuse. Curiously, there was no mention of her personal connection to Jackson — in particular, the famous 1993 live interviewwith him at Neverland Ranch, which took place just months before the first public accusations against him were made.

In that interview, she was an unabashed fan (“I think ‘King of Pop’ is actually too limiting,” she told him, referring to his moniker), but based on her conversation with Reed, Robson and Safechuck, it’s clear her perception of Jackson has shifted. Winfrey explained at the beginning of the taping that she reached out to Reed after watching the documentary, and told him that he had done “in four hours what I tried to do in 217 episodes” dedicated to educating her audience about sexual abuse.

As the conversation wound down, the subject turned to absolution. When the accusers were asked if they had forgiven Jackson, Safechuck admitted that he felt guilt just the weekend before for speaking out. “Like I let him down,” he said. “Like — it’s still there. The shadow’s still there.”

“As so many of you know, being a survivor is so isolating,” he said. “At least it is for a really long time. So to be in this space with you guys, the brothers and sisters in trauma and in triumph — that we’re standing, you know, and we’re here, I’m just so grateful.”