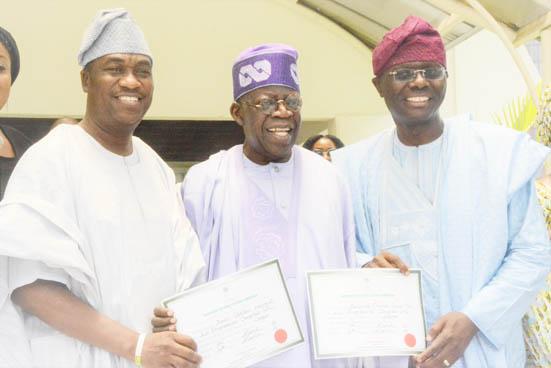 The duo received their certificates at a ceremony at the commission’s office in Yaba, Lagos, o Friday.

They were accompanied to the carnival-like event by their wives, associates, family members and All Progressives Congress (APC) leaders, including Tunde Balogun, the party chairman in Lagos,  Tajudeen Olusi, a key APC member from Lagos Island and Musiliu Obanikoro, former minister of state for defence.

At exactly 11:30am, Adekunle Ogunmola, INEC national commissioner in charge of Lagos, Ondo and Ogun states,  presented the certificate to Sanwo-Olu, charging the governor-elect to be magnanimous in victory.

Ogunmola charged Sanwo-Olu and Hamzat to pursue reconciliation and close ranks with their opponents, reminding them that tolerance of opposition remains a key foundation of constitutional democracy.

In his six-minute acceptance speech, Sanwo-Olu promised to lead “an all-inclusive government”, while extending a hand of fellowship to his opponents in the race.

He expressed joy that his victory was not tainted by violence and bloodshed, stressing that the process was free and fair.

The governor-elect specially paid tribute to President Muhammadu Buhari and Bola Tinubu, a national leader of the APC.

He said both men displayed responsible leadership, which he said led to victory of APC in Lagos and the centre.

He said: “Our resolve to lead the state as governor and deputy governor is not about our personal welfare and that of our families, but a determination to build a state that all of us will be proud of. We will not disappoint Lagosians for the confidence reposed in us to lead on their behalf. We promise to lead a government that will be responsible and that will work for the greater majority of residents.

“Whatever happened during the campaign period belongs to the past. It’s time for reconciliation and the state must move forward. Therefore, we will not engage anyone or group based on their political affiliation, ethnic nationality or whether they voted for us or not, we are all Lagosians and we will run a government that will work for all.”

Sanwo-Olu also praised party leaders and members in the state for sacrificing their energy and time for the party’s victory.