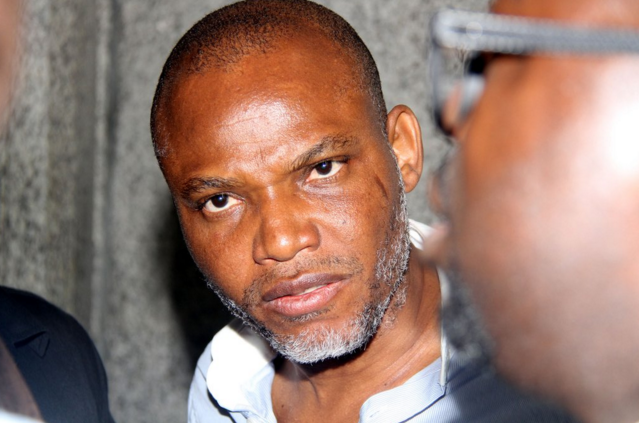 Nnamdi Kanu, leader of the Indigenous People of Biafra (IPOB), says he will challenge the court order directing his arrest in the United Kingdom.

The IPOB leader also tackled the federal government over his prosecution, insisting he is innocent of the accusations against him.

A federal high court in Abuja had revoked the bail granted Kanu in 2017, after his continued absence in court.

Kanu, who is facing trial alongside other Biafran activists for alleged treason, had gone into hiding months after his bail only to reappear in Israel after one year. He then moved to the UK.

Speaking during a broadcast on Radio Biafra, a recording of which was obtained by TheCable on Saturday, Kanu said he has instructed his lawyers to challenge the arrest warrant in a UK court.

“The revocation of my bail will never ever hold; they can never convict us because we have done nothing wrong,” he said.

“Every move they make, every decision they take, I will challenge. I have instructed my lawyers, we will challenge in a competent court of law here in Britain where law actually works. I am waiting for them.

“Any day you instruct INTERPOL, that day I will take it up in court and they must answer because here is a civilised country.

“First, I am not a Nigerian citizen. Your bail revocation will never ever work. Anybody interested in revoking my bail would have asked the army what they were doing in my place.”

‘WE WILL CONTINUE TO AGITATE’

The IPOB leader said the cause for a sovereign state of Biafra is not a crime, and that the group — which has already been banned and tagged a terrorist organisation — will continue to advocate for its cause.

“They have not even defined the crime they said I have committed. There is no crime in Nigeria called secession; secession is not a crime in Nigeria or anywhere in the world. Only armed rebellion is a crime, not self determination,” said Kanu.

“If you are out to demoralise us, you will never ever succeed. We will continue to agitate; we continue to move forward because we are IPOB; we don’t relent and can never ever relent. Which crime did Nnamdi Kanu and his co-defendants commit? Somebody should name it. Secession is not a crime.”