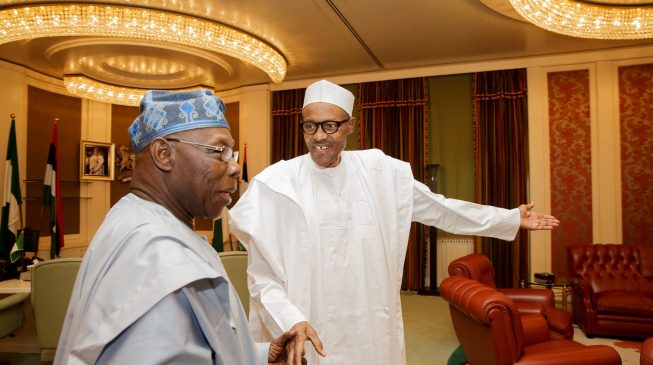 Former president Olusegun Obasanjo says he will not stop criticising President Muhammadu Buhari because he is his boss.

Obasanjo spoke at the Olusegun Obasanjo presidential library, in Abeokuta, Ogun state capital, during an occasion to commemorate his 82nd birthday .

He was reacting to Adedotun Gbadebo, alake of Egbaland, who asked him to “leave Buhari alone”.

The monarch had pleaded with the former president to relax his criticism of Buhari’s government.

“You all know that I was an officer under General Buhari so each time Obasanjo criticises my boss, I always stand to say my senior (OBJ), please leave the President alone. At 82, baba is still fighting on, please fight less and be a consultant to everybody,” Gbadebo had said
But responding, Obasanjo said there was nothing personal in his criticism of Buhari, adding that democracy involves criticism and not a family affair.

He reminded the monarch that he is also Buhari’s “boss”, while noting that he has held the mantle of leadership of the country longer than any leader.

He urged the monarch to tell the president to do “what is right that his boss wants him to do” if he wants to be left alone.

“Governance is not a family affair and democracy involves criticism and considering all sides to an issue. There is nothing personal between President Buhari and I,” Obasanjo said.

“In a democracy, you can criticise a policy, a government or a leader because democracy is not a family affair.

“If it is my brother that is occupying the leadership role and he is not doing what I believe he should do, he must be criticised and that is what democracy is all about.

“I  believe that Africa has no alternative to democracy, good governance, development and growth of our economy. And If that is not happening in any country, those who keep quiet about it are accessories after the fact.

“That is what democracy is all about, criticism and seeing the other side. So, if I say anybody in government in Nigeria or any government for that matter is not doing well, let that government prove that it is well.
“So, Kabiyesi, your boss, Buhari, there is nothing personal between me and him. Just as he is your boss, I am his boss, with all due respect.

“Now, the point is that I have been in that position longer than any Nigerian will ever be there. That’s true. If any Nigerian comes in and has two terms, he will not have almost four years of military rule.

“I have been there longer than any Nigerian would ever be. So, when I say something, I know what I am talking about. Kabiyesi, any time you say, ‘Leave my boss alone,’ I agree, he is your boss. But I am also his boss’. So, you might also ask your boss (Buhari) to leave his boss alone or do what is right that his boss wants him to do.”