Obiano: I knew it was impossible to beat Buhari 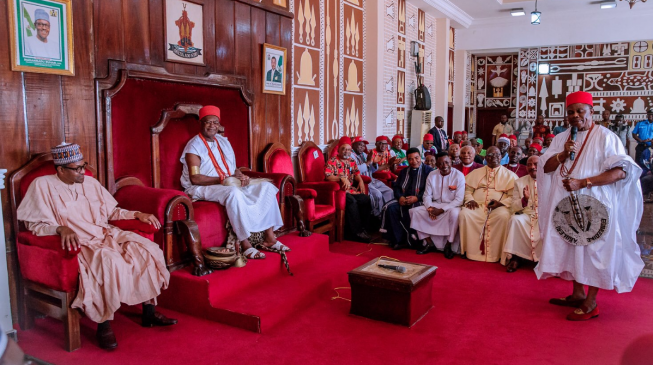 Willie Obiano, governor of Anambra state, says he supported the re-election of President Muhammadu Buhari because he foresaw his victory in the election.

Obiano, who disclosed this in a statement issued by James Eze, his chief press secretary, said he knew that it was impossible to beat Buhari.

Eze said the governor, made it clear to his close friends and allies that the opposition did not stand a chance against the president.

He, however, advised against any “excessively emotive opposition” that would rub Ndigbo the wrong way for the umpteenth time.

He argued that in a federation that has developed a thick skin for fairness, equity and justice, it is wiser to be subtle than confrontational.

He said he warned Ndigbo that it must not stumble twice over the same stone but nobody understood him “but foresight is a gift that is not available to everyone”.

“And now that the chickens have come home to roost, it has become clear to Governor Obiano that foresight comes at a price,” he said.

“Foresight is a lonely path to tread. It breeds unexpected resentment and hate. Having foresight could turn you into a sudden object of anger and unwise attacks. But on the long run, it never leaves you without the enduring sheen of grace and glory.

“And that happens only when the people finally wake up to smell the coffee. Sadly, in the case of many farsighted leaders, this happens after they are out of office or after they are gone!”

He added that some of Obiano’s Igbo brothers could not understand why he chose to tread the” less emotive path” in the last presidential election.

“It is easy to understand why this is so though. In a land that has suffered for so long from a biting scarcity of bold and perceptive leadership, it is not common to see a leader who has enough courage to point his people towards an unpopular direction,” he said.

“It is, in fact, hard to see a leader who has enough conviction to damn the consequences and swim against the current towards a hostile direction that he alone has seen as the only realistic choice left.

“And so, for those who still deride and mock governor Obiano for his foresight in the last presidential election, those who wilfully seek cheap opportunities to laugh at him, it might be worthwhile to always remember; that even the Scriptures warned us in First Corinthians chapter one verse twenty-seven, that sometimes, “God uses the foolish things of this world to confound the wise.”