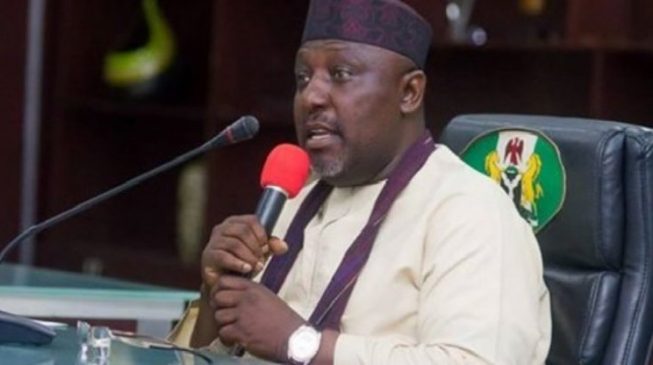 Rochas Okorocha, governor of Imo state, says he has sacked Adams Oshiomhole, chairman of the All Progressives Congress (APC), for anti-party activities.

Reacting to his suspension from the ruling party by the national working committee (NWC) of the party led by Oshiomhole, Okorocha said the chairman lacked the power to suspend him.

He said as a founder of the APC, he could say authoritatively that Oshiohmole was involved in anti-party activities.

He spoke on Sunday Politics, a programme on Channels Television.

“I just heard from media reports that I have been suspended from the party (APC). I think Adams is seeking for relevance and attention,” he said.

“He doesn’t have such powers to remove somebody without following due process. I think Adams is the biggest player of anti-party in APC. The man has simply destroyed the party to a great extent.

He accused Oshiomhole of imposing Hope Uzodinma, APC guber candidate in Imo on the party.

“The candidate that Oshiohmole imposed on the party in Imo State lost his votes for the Presidential election and all the members of the coalition in Imo State worked for PDP,” he said.