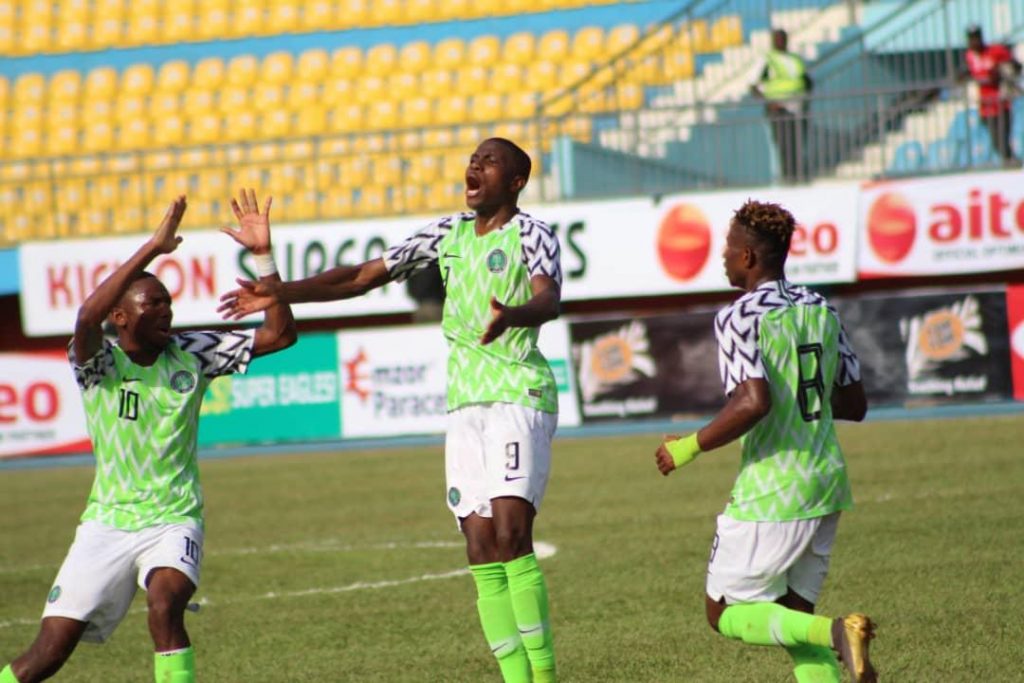 Nigeria sailed into the final round of the 3rd Africa U23 Cup of Nations qualifying series on Monday, beating Libya 4-0 on the back of a Victor Osimhen hat–trick at the Stephen Keshi Stadium in Asaba.

The North Africans won the first leg 2-0 in Ben Guerdane, Tunisia on Wednesday last week, and came fully prepared to defend their advantage.

But Osimhen, alongside fellow U17 World Cup winners Kelechi Nwakali, Samuel Chukwueze and Orji Okonkwo bossed proceedings in a one –sided affair in the city that is fast turning to Nigeria’s football capital.

After 10 minutes, Osimhen, highest –ever scorer at the FIFA U17 World Cup, who was drafted into the younger squad from the Super Eagles following the reverse in Tunisia, hinted of what was to come when he turned sharply and shot towards goal, but goalkeeper Islam Alharam, who had a torrid evening, held the ball.

Four minutes later, another U17 World Cup winner Taiwo Awoniyi missed from a brilliant team move, and in the 19th minute, Nwakali rocked the upright from a free –kick as Alharam was beaten. A minute later, the energetic Orji Okonkwo blasted over the bar from the six –yard box as Alharam punched a close range shot.

Osimhen opened the scores in the 33rd minute, following up on another blocked effort from another Nwakali free-kick to hook the ball into the roof of the net with Alharam stranded.

Now, the Olympic Eagles started to fire from all cylinders. Chukwueze, from a free –kick, rocked the crossbar in the 35th minute, and two minutes later, Orji Okonkwo’s shot was parried. Osimhen picked up the ball from the left side, dashed past a defender and unleashed a scorcher that rocked the upright on the dot of 45 minutes.

Four minutes after the re-start, Nwakali’s shot went over the bar, and in the 65th minute, Alharam, just too busy, saved from Victor Osimhen.

A minute later, Osimhen would not be denied, as he stole the ball when Alharam thought he had saved from a pull –out, and slammed into the net to equal the scoreline on aggregate.

From a glorious pass in the middle, Osimhen latched onto the ball, outran a defender and left Alharam with no chance as he scored his third of the afternoon.

On the dot of 90 minutes, Chukwueze, with Alharam to beat, failed to make impact with the ball. But there would still be a fourth, and again Osimhen was involved, as he back-heeled the ball from a goalmouth tussle, gifting substitute David Okereke with a glorious opportunity to slot past Alharam.

Nigeria will square up against the winner of the Kenya/Sudan fixture in the final round of qualifiers in June, with the winner to be eligible for a place at the 3rd Africa U23 Cup of Nations in Egypt in November.

The three top-placed teams at that championship will represent Africa at the Men’s Football Tournament of the 2020 Olympics in Tokyo.