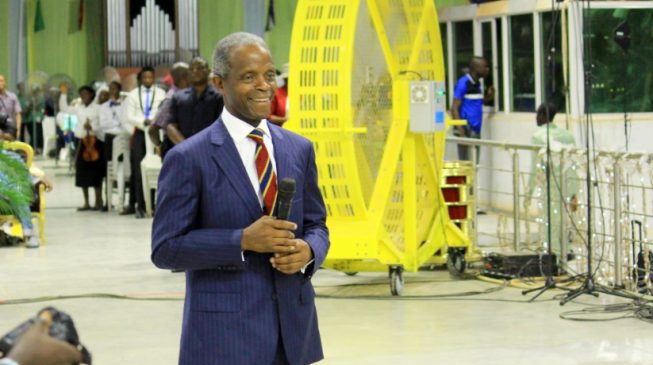 Vice-President Yemi Osinbajo on Friday night revealed details of the special prayers he received at the Redemption Camp hours before his helicopter in Kabba, Kogi state.

He Enoch Adeboye, the general overseer of Redeemed Christian Church of God, prayed the same prayer thrice for him hours before the air mishap.

Preaching on the 35th anniversary of the church’s Holy Ghost Service, which marked his 77th birthday anniversary, Adeboye also identified three powerful ways to draw God’s attention for His intervention in life.

Osinbajo was among those who testified during the service. The cameras picked him as he walked from his seat towards the congregation, a broad smile on his face.

“I am Yemi Osinbajo, pastor in charge of Lagos Province 48 of RCCG,” he began as the congregation cheered excitedly.

“I thank God for the salvation of my soul.

“Two testimonies: the first is that on February 2nd. I came late for the Holy Ghost Service. After the service I went to see Daddy (Adeboye) in his office and he said he wanted to pray for me. My wife, Dolly, and I knelt down as he prayed, ‘Father, I want you to give special protection to your son.’

“He prayed that three times and stopped. Then he prayed it again.

“I was getting worried about why he had to pray that way. But anyway, later that day the helicopter I was travelling in crashed in Kabba. All 12 of us in the helicopter survived without a scratch. I want to bless the name of the Lord for that.

“My second testimony is that on February 23, I was re-elected with President Buhari, for a second term as Vice President and I want to praise the Lord. Praise Jesus. Who did it?”

The wife of the GO, Folu Adeboye, had earlier offered her usual prayers for all nations, during which she specifically thanked God for the largely peaceful presidential and national assembly elections.

Preaching a sermon with the theme ‘Swimming in Glory – 3” later, Adeboye dwelt on the story of the woman with the issue of blood in Mark 5:25-34 to show how the touch of God changes situations for good.

He highlighted five takeaways from the text by tracking the woman’s action from the decision that she would seek a solution from Jesus to the 12-year ordeal, through the self-assurance that she could; and the determination that nothing, not even the crowd around Jesus and their possible hostility towards her, would stop her. She braced all odds to touch the helm of Jesus’ garment in a way that made Him feel that some virtue had left him.

Those were days when Jesus lived physically among us but the GO explained that it is still possible to touch God through Jesus.

Citing biblical evidence and testimonies, he listed the three ways in which God can be touched as faith, prayers and giving. 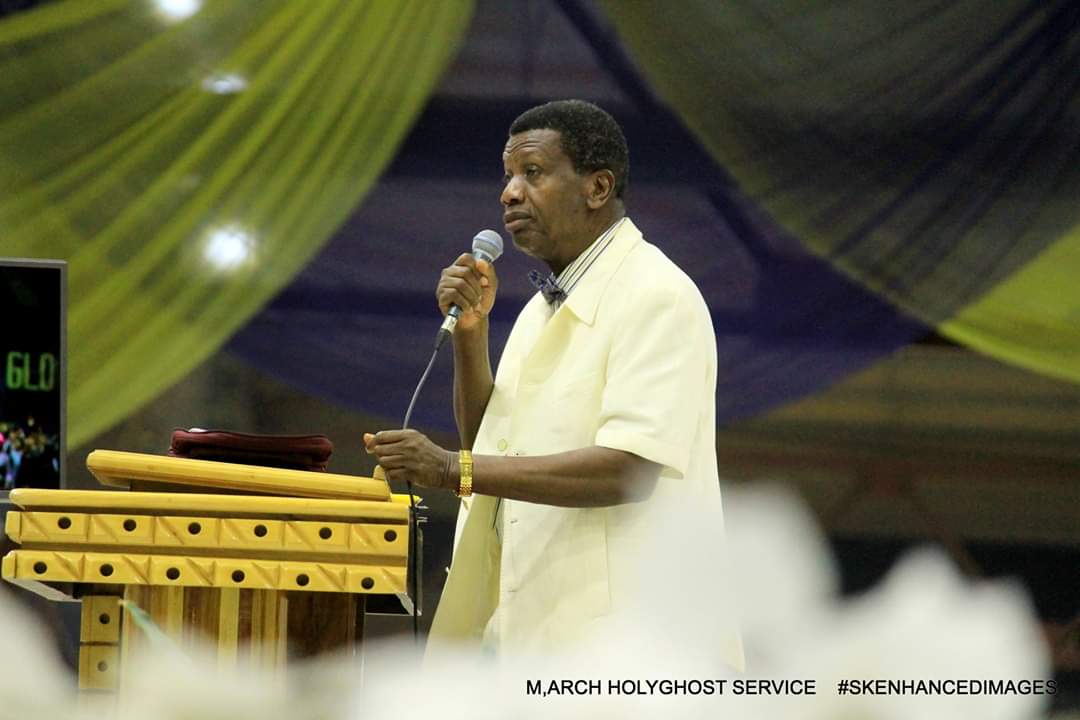 Adeboye prayed for Osinabjo thrice before the crash

He said demonstration of faith touches God. In a testimony, he recalled that soon after assuming the position of General Overseer, he embarked on visits to the various parishes of the church. There were only 40 parishes then.

A woman who was desperately looking for the fruit of the womb missed his team at the only parish in Alagbado in Lagos then and broke down hysterically.

But a member of the church told her the next church the team was to visit.With her hope renewed, she left.

The following day, she went to that church we were to visit first thing in the morning, and waited until we arrived. Of course, she didn’t know our identities. She wasn’t a member of the church but she knew that sooner or later they would introduce the special guest.

So, she sat down and waited. When we were later introduced, and I stood up to preach, she asked someone, “Is that the man?”

She said, “Glory be to God, I know I am pregnant.”

Nine months later, she had a baby boy.”

From the Bible, he gave the example of Blindman Bartimaeus (literally “Son of Timaeus”) by the pool of Bethsaida, who prayed so desperately, as Jesus passed by, that he got his healing.

Pastor Adeboye also cited his own experience of how in those early days of ministry his passionate prayer to God that he didn’t want to be an ordinary pastor resulted in an earth tremor at the Redemption Camp, which was felt as far as in Ijebu Ode in Ogun State. 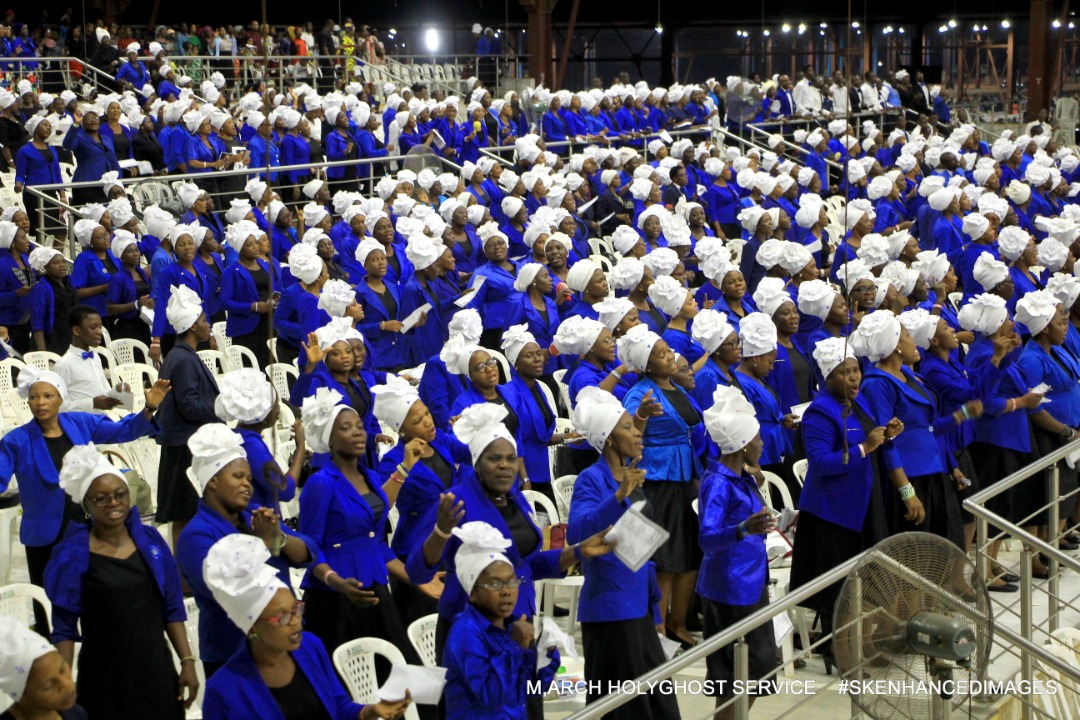 His account: “In those days, nobody lived at the Redemption Camp. I am sure some of the elders of the church would remember when one day an antelope bumped into our Ministers’ Conference. Poor animal, it ended up in the stomach of some people.

“Early in the morning every Tuesday, I would leave my house in Mushin for the Camp and be there until Thursday morning when I went to the Headquarters for Faith Clinic. The only other people in the Camp then were the carpenters who were working, and they would stop as soon as it is dark and retire for the day.

“But I wanted to seek Him; I wanted to be alone; with no noise and nothing to distract me. One night – I remember that night like yesterday – I prayed: ‘Father, I surrender all; it is only you now; that is all I want. I don’t want to be an ordinary pastor. Please, I am not seeking anything else. Not seeking for gold, not seeking for clothes, not seeking for fame; I want you to empower me so I can do this work. And if you are not going to do it, take me away.’

That day, He answered, and there was a tremor in the Camp. The tremor went as far as Ijebu Ode where pictures that hung on the wall were dropping.

When you seek God with all your heart; when you seek Him in desperation, you will find Him.

He gave the examples of the widow who gave her mite during church offering and King Solomon’s sacrifice of a thousand bulls from the Bible. He added a testimony of a man who offered to fund a Convention of RCCG and later became so influential that he was made the chairman of bank he used.

Pastor Adeboye always emphasizes how the Heavens rejoice over soul-winning. Many people had earlier responded to the altar made by Rev Joe Olaiya, who delivered the second sermon. The first sermon was by Pastor Samuel Olanrewaju.

A major part of the service came towards the end when Adeboye revealed the promises of God to answer prayers offered speedily.

The Holy Ghost Service was birthed in a similar encounter in 1989, when he said God approved it as a birthday present to him in London.

The GO, noted for “signs, wonders and miracles” read out prayer points and asked the congregation to pray for 30 minutes.

Adeboye, who turned 77 on March 2, is regarded as a miracle himself.

Said Vice President Osinbajo: “For a man born to financially-challenged parents in the village of Ifewara, Osun State, who had no shoes at 18 years old, who was not a Born Again Christian until the time he was a mathematics teacher at the University of Lagos, becoming the leader of a church with a strong presence in over 198 countries (the church had only 40 parishes when he took over as General Overseer), and with over 32,000 parishes in Nigeria alone, is indeed, a miracle worth knowing.

“For this same man to remain infectiously humble, in spite of his enormous power, influence and popularity is also a miracle in itself.”

The Special Holy Ghost Service continued on Saturday with a Holy Communion and an anointing service; and ends on Sunday with thanksgiving.