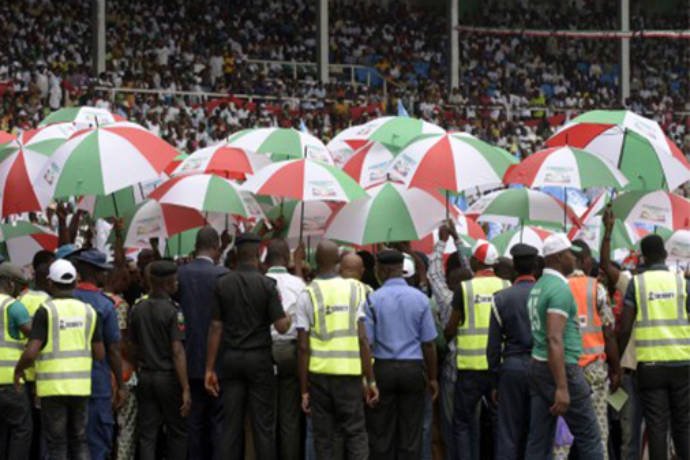 The Peoples Democratic Party (PDP) in Sokoto state has asked the All Progressives Congress (APC) to accept defeat in the governorship election and stop “hallucinating with false accusations”.

In a statement on Tuesday, the party taunted the APC in the state for losing the election “notwithstanding hiring of political thugs and vote buying”.

PDP’s Aminu Tambuwal defeated Ahmad Aliyu of the APC in the governorship poll with a margin of 342 votes – probably the slimmest margin in Nigeria’s history.

But the APC rejected the victory, alleging irregularities and rigging.

In the statement issued by Abdullahi Yusuf, PDP spokesman in Sokoto, the party dismissed the claims by the APC, while accusing them of trying to rig the election to their favour.

“With the unsubstantiated outright rigging by PDP as claimed by the opposition APC, the question here is who rigged who? With the massive deployment of security operatives in favour of APC, there is no way our party can even attempt to rig an election in which we have confidence that by the will of Allah, the victory is ours,” he said.

“This is not withstanding hiring of political thugs from the neighbouring states of Kebbi and Zamfara, publicly brandishing their dangerous weapons to endanger the lives of the innocent voters in Kebbe, Tambuwal, Rabah, Tureta and Goronyo Local Governments.

“With the PDP and its candidate’s victory, the ‘ALU PHENOMINON’ has finally been demystified and given final befitting burial by the people of Sokoto State.

“Therefore, the right thing for the opposition to do is to simply accept defeat and find a way of settling their paymasters by telling them the truth that no amount of money and no degree of intimidation can make good people of Sokoto state to change their loyalty to Mutawalle, his government and his political associates.

“As democrats and advocates of free, fair and credible elections, and believers of justice, the opposition APC should note what Napoleon Hill once said that; “When defeat comes, accept it as a signal that your plans are not sound, rebuild those plans, and set sail once more toward your coveted goals.”