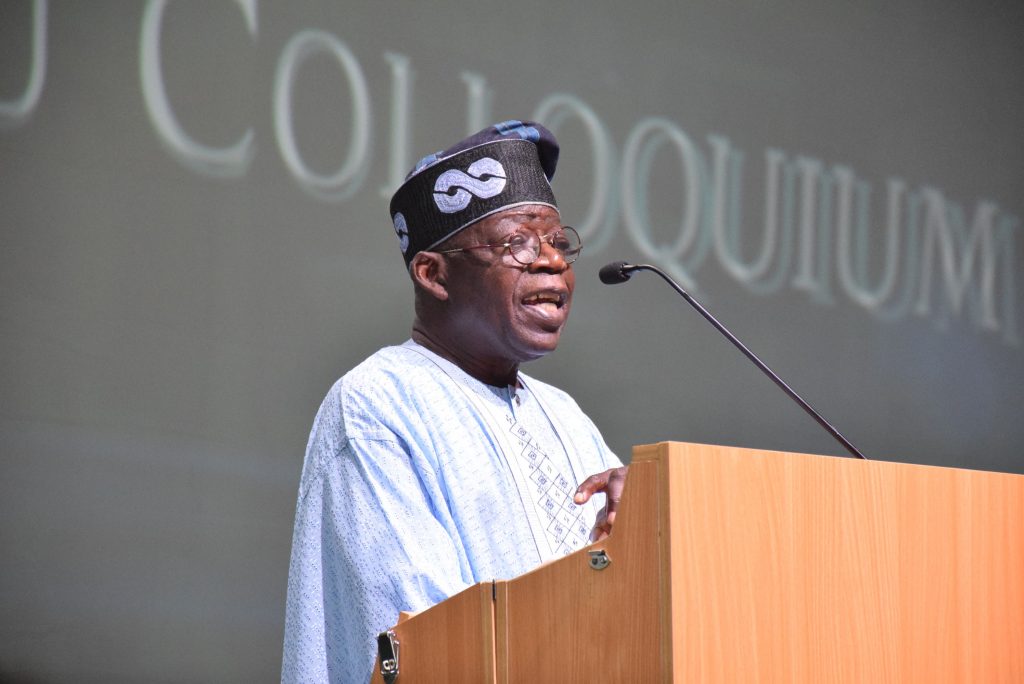 Bola Tinubu, a national leader of the All Progressives Congress (APC), says “O to ge”, the slogan used to dislodge Senate President Bukola Saraki is not applicable in Lagos.

Loosely translated as “enough is enough”, the slogan yielded massive rewards for Kwara APC as the party displaced all the three sitting senators in the state, won all house of reps seats and President Muhammadu Buhari defeated Atiku Abubakar, presidential candidate of the Peoples Democratic (PDP), with over 150,000 votes in the state.

Some politicians and activists opposed to Tinubu had attempted to use a similar strategy to stop the emergence of Babajide Sanwo-Olu, his preferred candidate.

But fielding questions from reporters after casting his ballot at polling unit  047, ward 3, Ikeja local government area of the state, Tinubu said in Lagos, the people should consider “o to pe”, translated as “it’s worthy of praise”.

He said there is a limit to copying concepts from other states, expressing confidence that his party would emerge victorious in the exercise.

“The O to ge slogan is for Ilorin; Lagos is not Kwara state, and there is a limit to copying. Lagos should be O to pe, not O Toge,” he said.

“We are going to win because we are the only party in Lagos state, others are pretenders; they come and they will go away. Leopard cannot change his skin.

“Lagos belongs to the progressives; we are progressives and we will remain progressives. For Lagos, it has seen tremendous development since I was the governor; before then, the highest internally generated revenue (IGR) was N600 million, per month, now it is over N30 billion.

“No other state has achieved what we have achieved, financial independence, as Lagos state; no other nation, they all depend on allocation from the federal government. Lagos State today will not depend on any allocation before we take care of capital needs; we build roads and bridges everywhere from Oregun to many parts of the state.

“The real estate value of Lagos state has exponentially increased than any other state in the federation. We are the fifth largest economy in Africa; let me see that governor who will do better than that.”

Tinubu said the the violence which erupted in the Okota area of state during the presidential and national assembly elections, is not enough to give the impression that the state is prone to violence.

He blamed the media of giving hype to negative stories, saying that such attributes would not bring the necessary progress.

“I take exception to what happened in Okota two weeks ago. I am very upset about that incidence placing Lagos as if we are violent-prone,” he said.

“We have about 1,325 polling units in Lagos State and only five units were affected in Okota. That should not mean that the election was a failure in the state.

“If we should rate it, the election should be about 97 per cent rate of success if right mentally. An incident in Okota should not be used to generalise the whole election in Lagos State.

“The success rate should have been the story, not the ugly incident that should be the story. For the media, how can five units out of 1,325 units constitute a violent election and were given hype that Lagos is violent; we cannot do justice to that.

“How can we have development to the economy and the medium of information? In terms of security, Lagos has always been ready to celebrate democracy, and violence free. The security officials are doing well and the INEC has started well too with the logistics well managed.

“We will continue to welcome everybody to Lagos State.  We cannot stop people from coming to the state. If Lagos is not good enough, they won’t come. If the state is plagued with disease or insecurity or unemployment, people won’t come. Those leaving their states to come to Lagos are welcome, they are not a threat.”