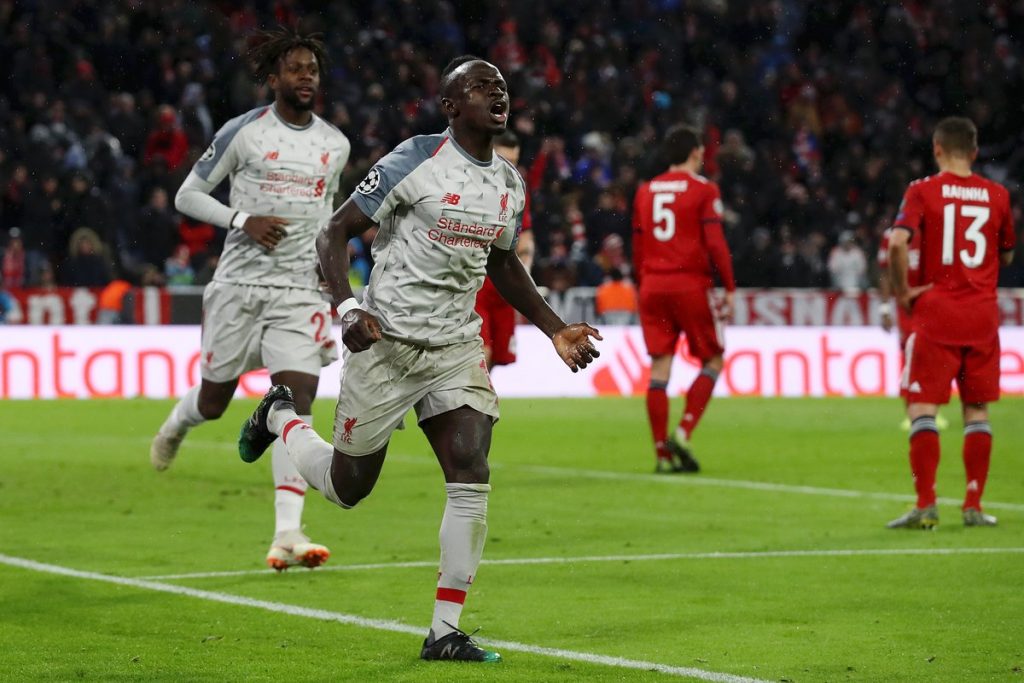 Sadio Mane scored twice to lead Liverpool into the quarter-finals with a 3-1 win at Bayern Munich.

In the game played at Bayern’s Alianz arena stadium, Jurgen Klopp’s men reigned supreme, and their prolific Senegalese was the star of the show.

The 26-year-old has been attracting interest from Real Madrid in recent days and showed has shown why in the 17th minute.

Latching unto a ball from deep with the perfect control, his touch took him away from the onrushing keeper, Manuel Neuer, and he dinked the ball into an empty net. All this was done despite being under pressure from a defender.

Bayern, despite Liverpool’s geggenpressing, kept playing from the back to try and expose the Kop’s high-line defence, and this brought about the equalizer six minutes from the interval.

Sergey Gnabry, like Mane, also latched unto a through ball from deep, held off the attention of Andy Robertson to drive to the by-line and his cross which would have set up Rober Lewandowski for a tap-in was inadvertently turned in by Liverpool defender, Joel Matip.

Clear-cut chances were hard to come by in this match characterised by sloppy passes from both sides, but it was Liverpool who grabbed the next goal through defensive rock, Virgil van Djik.

The Dutch centre back nodded home James Milner’s corner kick in the 58-minute to all but seal qualification, while Mane added gloss to the scoreline with another header six minutes from time.

The win ensured England would have four representatives in the quarterfinals, while Bayern have failed to qualify for the last eight stage for the first time since 2010/11 season.

The Reds would be joined by Barcelona who thrashed Lyon 5-1 thanks to a Lionel Messi double at the Camp Nou stadium.

With Cristiano Ronaldo hugging the limelight last night after his hat-trick heroics, a response was expected from Messi- such is their rivalry over the past ten seasons- and the dimunitive Argentine responded with a brace, one from the penalty spot.

The draw for the quarter finals of the UCL will be held on Friday.