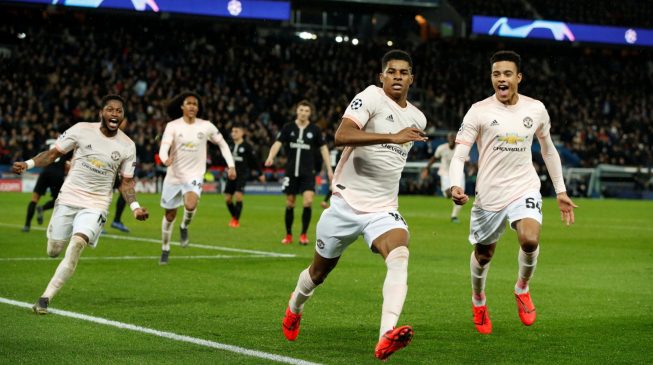 Manchester United delivered the biggest surprise of the european season so far, earning a remarkable last-gasp 3-1 victory at PSG to advance on away goals rule after a 3-3 aggregate scoreline.

The Red Devils’ interim manager, Ole Gunnar Solskjaer, had talked up an unlikely comeback for his team coming into this fixture despite losing the first leg 0-2 at Old Trafford.

The Norwegian coach conjured up the spirit of a similar feat by United’s treble-winning 1999 side which won 3-2 at Juventus on the road to lifting the UCL crown, and Sir Alex Ferguson, the retired coach who masterminded that triumph was in the crowd to witness this latest United comeback.

Thomas Tuchel, PSG coach, warned his team to be 200% ready, but those word flew out the window just three minutes into this match, a poor back pass gifting Romelu Lukaku the opener.

The bulky striker rounded Gianluigi Buffon before sliding into an open goal from an acute angle. Game on.

The Qatar-backed PSG would level fifteen minutes later through Juan Bernat, but much of the work was done by wonderkid, Kyliann Mbappe.

The France international pounced on a loose ball to cross for the Spanish left back to make it 1-1 and restore parity.

Another defensive blunder would let United in and, as they have done so effectively since Solskjaer’s arrival, punished their hosts.

Gianluigi Buffon moved to PSG with his eyes still fixated on the only trophy that has eluded him in his illustrious career but the 41-year-old took his eyes off the price, with Lukaku again the benefactor.

The Belgian striker was given the easy task of tapping in after Buffon spilled a routine albeit swervy Marcus Rashford shot to make it 2-1 going into the break, and with it, the comeback remained alive.

The Parisians reverted to type in the second half, controlling possession while cherry-picking their attacking moment, and they scored through Di Maria ten minutes after the restart but the Argentine was a yard offside.

A dull second half was only brought to life in the last ten minutes, Mbappe springing the offside trap but losing his footing as he tried to round De Gea. Di Maria hit the post from the loose ball, and more drama ensured in injury time.

Diego Dalot’s desperate shot hit the arm of PSG defender, Pascal Kimpembe, and the referee, after taking his time at the pitch-side VAR system, concluded that Kimpembe’s arm was outstretched and denied Dalot a goalscoring opportunity, therefore awarded the penalty.

Marcus Rashford stepped up to smash his kick beyond Buffon for a 3-1 lead, but PSG nearly pulled a goal back with over eight minutes of extra time being played.

De Gea flapped at a cross which dropped to Do Maria’s feet, but the former Man United man’s shot was blocked at the near post and, shortly afterwards, the final whistle which sparked United players celebrations, sprinting towards their supporters who celebrated into the Paris night.

Man United, with the comeback win, became the first club in UCL history to lose by two or more goals in the first leg at home but still qualify for the next stage.