The French port city is shedding much of its once-gritty reputation and emerging as a place where ambitious cultural and culinary offerings take center stage. 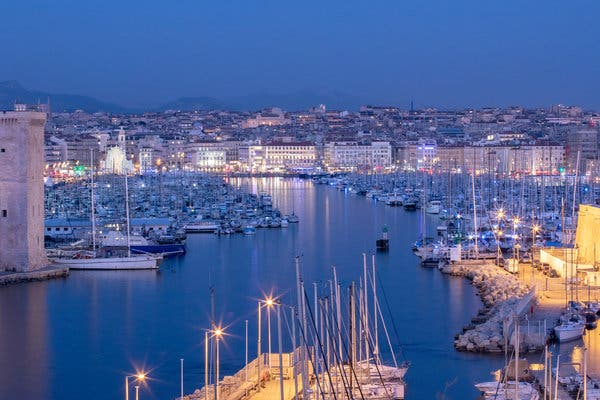 Marseille’s sprawling harbor, Le Vieux Port, is the picturesque heart of the city.CreditCreditGabrielle Voinot for The New York Times

No city divides the French like Marseille. For every admirer cooing about the sun-warmed sea, craggy coastlines, fish-rich bouillabaisse and the Mediterranean melting pot (thanks to 20th-century immigration from Greece, Spain, Italy, Corsica, Morocco, Tunisia and Algeria), someone else is grousing about corruption, dirty streets and eroding Frenchness. And where the port city’s champions see a swaggering no-nonsense metropolis free of bourgeois pretensions, others see a lack of refinement.

Everyone agrees, however, that Marseille is a city in metamorphosis. Major urban-renewal projects have upgraded the waterfront into a sprawl of state-of-the-art cultural venues, shopping centers and skyscrapers from five-star architects. At the same time, ambitious seasonal cooking, artisanal cocktails and indie-fashion concept stores — once nearly unheard-of — are making noticeable inroads, infusing the city with something it had mostly lacked: cool and cachet. Perhaps inevitably, some now lament that Marseille is losing its distinctive working-class character and southern French soul. And, predictably, some now gush that the city has never been more modern, ambitious or happening.

Built between the 14th and 17th centuries, Fort St. Jean has been restored and reconfigured as a public space and is an essential part of your Marseille initiation. Its battlements, towers and rooftop gardens provide commanding views of the expansive blue waters and the sprawling cityscape, from the postmodern Villa Méditerranée next door to the city’s 19th-century, neo-Byzantine churches: Notre Dame de la Garde basilica and Cathédrale Sainte Marie Majeure. Admission 9.50 euros, or about $10.50.

The sea gave birth to Marseille, carrying the Greek and Roman settlers who laid the earliest stones of ancient Massilia. Marseille has repaid the favor with MuCEM, a waterfront museum complex devoted to the Mediterranean and its civilizations. A high footbridge connects Fort St. Jean to MuCEM’s dramatic cube-shaped museum, known as J-4. Panoramic vistas come courtesy of a rooftop lounge and glass exterior catwalks on each facade, while two ground floor exhibitions provide panoramas of Mediterranean history. Alas, some might find “Ruralités,” dedicated to the agricultural history of the basin, as dull as dirt. Fortunately, “Connectivités” impresses with its colorful evocation of Renaissance-era maritime powers — including Istanbul, Venice, Seville and Lisbon — through Ottoman ceramics, Italian silks and more. The bookshop concludes your local education with French-language guidebooks, maps, literary works and historical studies like “Marseille Ou La Mauvaise Réputation.” 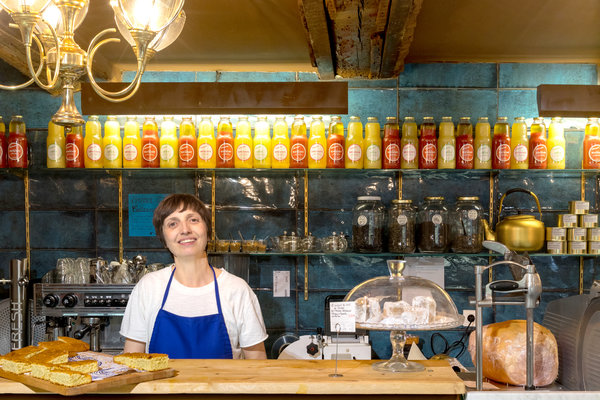 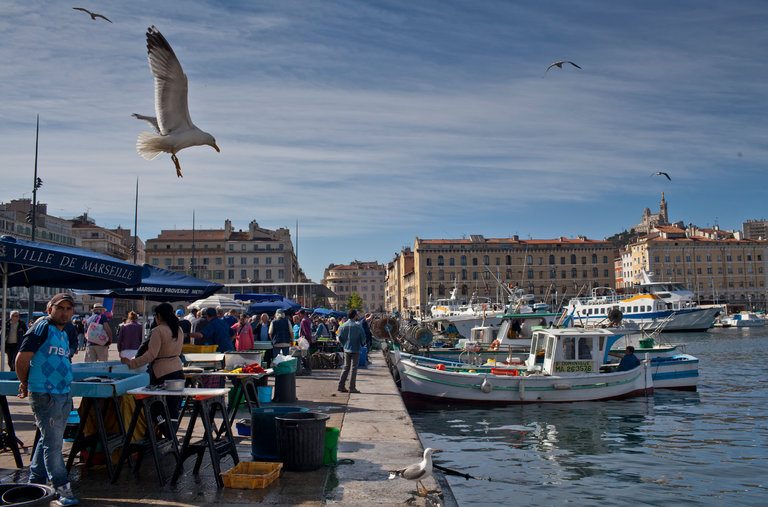 Many of Marseille’s immigrant waves washed up in the Panier district, a village-like maze of narrow cobbled streets, tiny squares and weather-beaten houses in sherbet colors. Rue de Lorette serves up two classic flavors of Mediterranean Marseille. Start your two-stage ethno-bloat with one of the two thin, crispy pizza options — anchovy or cheese (15 euros) — at Chez Etienne, a lively tile and timber restaurant founded by Sicilians in 1943. The former is all zesty red sauce and fresh fish; the latter is agreeably gloppy and gooey. Crossing the street, you arrive in Morocco at Ahwash, a stylish living room-like restaurant and boutique. For your main course, you can plunge into roasted lamb, chicken tajine with preserved lemons (16 euros) or an excellent tajine of stringy-soft beef, long-stewed peppers and caramelized onions (16 euros). Take home Moroccan glassware, ceramics or candles. 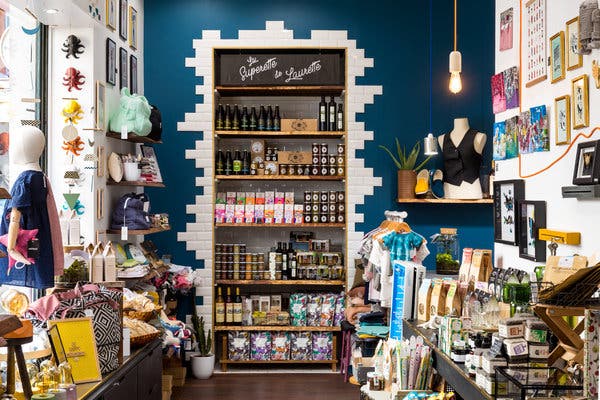 At Chez Laurette, every item, from rugged leather boots by La Botte Gardiane to retro-1960s dresses, is a product of France.CreditGabrielle Voinot for The New York Times

When your shopping list includes a concrete rendering of Yoda’s head and socks embossed with erotic cartoons, visit Chez Laurette. After working in Paris for Marc Jacobs, the namesake owner returned home to southern France and opened a concept store where every item — from beers to bath products — is made in France. Fashion reigns, with rugged leather boots by La Botte Gardiane, shimmery retro-1960s dresses by Mood-eh and other Gallic garments. Nearby, Le Diable Méridien will accessorize you in French leather, from watches by Les Partisanes to satchels from Bleu de Chauffe, while Jogging boutique-cafe runs the couture route occupied by cult designers like Simon Jacquemus (preppy fashion) and Marine Serre (rock ’n’ roll chic dresses and accessories).

Run by a tattooed young staff and playfully overdecorated with nautical-kitsch décor, La Boite à Sardine at first seems a silly take on the traditional seafood shack. But the daily-changing menu will please purists: All is fresh, and the cooking is mostly straightforward with occasional embellishments. A winter afternoon visit found oysters, sea urchin, calamari and sole on the menu, along with cold crunchy-pink shrimp (meant to be torn apart with your hands and dunked in aioli mayonnaise) and slabs of thick bonito, pan-fried in a charred bread crumb crust. A glass of fruit-forward Coteaux d’Aix-en-Provence white wine is a worthy accompaniment. A two-course lunch for two costs about 50 euros. 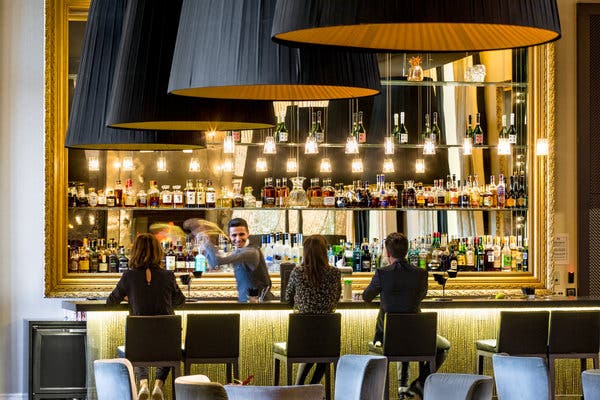 Don’t insult Friche La Belle de Mai by calling it an “art museum.” Sprawling across the vast grounds of a 19th-century tobacco works, the hodgepodge of historical and contemporary buildings might best be described as a multispace, polypurpose cafe-restaurant-bar-bookshop-skatepark-playground-graffiti gallery-concert hall-nursery school and sometime yoga workshop that also happens to host multiple rotating contemporary art exhibitions. In other words, this onetime cigarette factory is still lit up, day and night. Museum admission: 5 euros.

The trademark innovations are all there: rows of vertical pilotis that lift the concrete apartment building off the ground; horizontal bands of windows; panels of bright primary colors to enliven the gray exterior. Massive and modernist, the so-called Cité Radieuse could only come from the forward-looking mind of Le Corbusier — although, admittedly, the pioneering Swiss architect was looking forward in the 1940s and ’50s, when Brutalism was still futuristic. Named a Unesco World Heritage Site in 2016, the building contains several areas open to the public, including the rooftop MAMOart gallery (summer only) a new bookshop (a trove of architecture tomes, posters and even paints) and the 21-room Hotel Le Corbusier. The outdoor terrace of the hotel’s restaurant, Le Ventre de l’Architecte, is a prime spot to sip a Pietra beer from Corsica (4 euros) while watching the Mediterranean sunset. 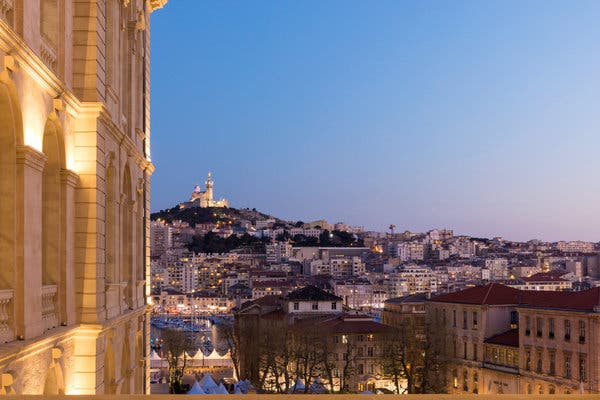 An evening view of Marseille from the Intercontinental Marseille — Hotel Dieu.CreditGabrielle Voinot for The New York Times

Someone must rename Sépia. The moniker evokes a colorless and static scene, frozen in the past. This new lively restaurant is none of those things. The chef, Paul Langlère, a veteran of some Alain Ducasse gastronomic temples, has elevated a disused snack bar into one of Marseille’s hottest tables. Situated on a leafy hillside, the simple industrial-cool dining room and outdoor tables offer views of the twinkling city while serving up an ever-changing chalkboard menu of fresh ingredients in freestyle preparations. A February visit included a house-smoked slab of local mackerel that burst with citric crunch and radiant hues (courtesy of beetroot spaghetti, diced apple and horseradish yogurt) followed by a filet mignon as thick as a Dickens novel that was topped with charred seaweed for a crisp, smoky-briny mouthful. Three courses are 39 euros.

As night falls in Marseille, three friends approach the darkened storefront of a cheesy souvenir shop, fumble with the door handle and vanish inside. Minutes later, more do the same. On and on couples and small crowds arrive, giddy to be creeping into a closed shop. What the devil? This is Carry Nation, a bar so secret that one must register online to obtain the address, door code and entry instructions. Within awaits a Roaring Twenties universe of vintage furniture and bartenders in suspenders who mix cocktails like Un Automne en France (whiskey, crème de peche, Racine de Suze bitters, yellow wine and verjus; 13 euros). For drinks without the rigmarole, nearby Gaspard is a tiny wood-lined bar whose specialties include La Sieste de Shiva (whiskey, chai spice and pineapple; 12 euros), a sweet-sour concoction. 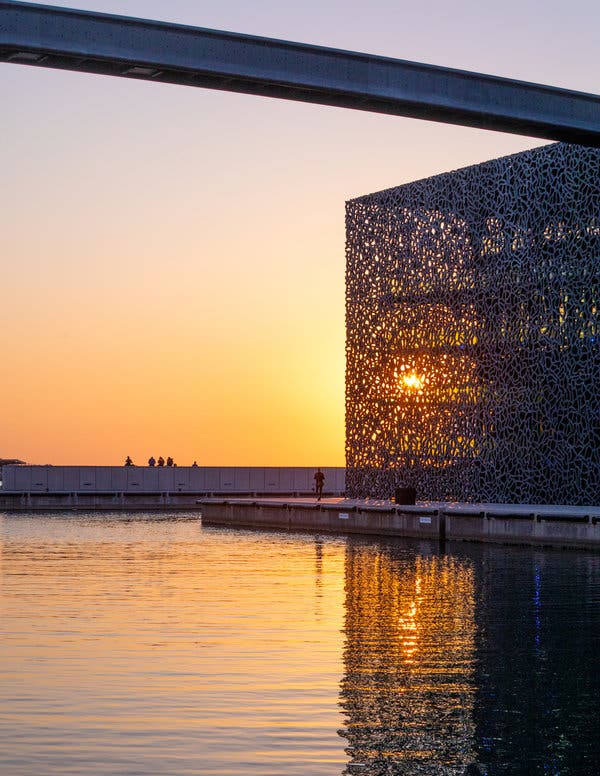 MuCEM is a waterfront museum complex devoted to the Mediterranean and its civilizations.CreditGabrielle Voinot for The New York Times

A strange, barren and (almost) uninhabited world hides 30 minutes from Marseille’s Vieux Port: the Frioul Archipelago. Blasted by eons of wind and waves, the four small islands have eroded into rocky, chalk-white lumps of cliffs, ravines, coves and outcroppings where perhaps 100 intrepid locals make their home. The Frioul If Express ferries you to If Island — where you can explore the abandoned 16th-century prison immortalized in the novel “The Count of Monte Cristo” — and then onward to Ratonneau Island. From the harbor, gravel paths extend along the coast and into the interior, leading to the ruins of a 19th-century hospital and various fortresses. Amid squealing gulls and crashing surf, the journeys provide nonstop sublime vistas, most notably of Marseille itself, spreading down the hills and stretching along the cliffs of the Mediterranean coast. Ferry ticket: 10.80 euros round-trip.

Marseille’s sprawling harbor, Le Vieux Port, is the picturesque heart of the city. Nearby studios without a view cost around $50 to $60 a night on www.airbnb.com. Apartments with views tend to be larger and fancier, with prices starting around $120 a night.

With its lifestyle boutique, restaurant, vast garden and frequent Friday night parties, Hotel Maison Montgrand (35 rue Montgrand; 33-4-91-00-35-20) is a Marseille tastemaker. The 49 rooms are done in minimalist style with smooth woods and muted tones. Doubles from 75 euros to 165 euros depending on the season and demand.