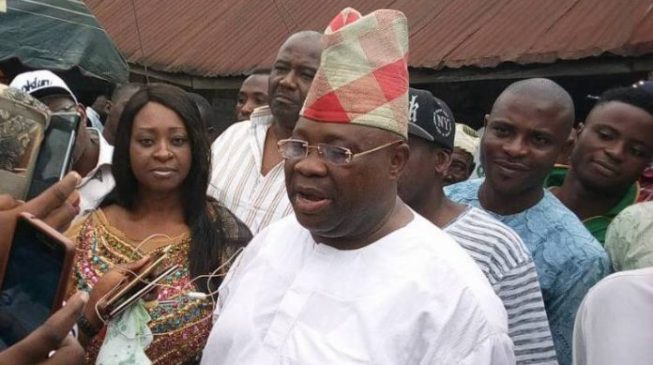 A high court sitting in Abuja has nullified the candidature of Ademola Adeleke who contested the 2018 governorship election in Osun state under the Peoples Democratic Party (PDP).

The court gave the ruling based on a suit filed by Wahab Raheem and Adam Habeeb, two chieftains of the All Progressives Congress (APC).

The duo had filed the suit seeking the disqualification of Adeleke over the allegations that he did not possess secondary school certificate (SSCE).

The certificate is required for an elective position, according to section 177 (d) of the 1999 constitution.

The West African Examinations Council (WAEC) had confirmed that Adeleke sat for its examination in 1981.

The council confirmed Adeleke’s participation in an affidavit provided at the request of the court.

But in his ruling Othman Musa, the presiding judge, said while the court’s findings showed that Adeleke entered secondary school in 1976, there was no record to show that he actually graduated as his name was no longer seen in the school’s register from 1980.

The judge further said the result Adeleke attached to his form CF001 which he submitted to the Independent National Electoral Commission (INEC) was fake.

He added that it was found to be different from the one presented to the court by the principal of Ede Muslim High School, Ede, Osun, where Adeleke supposedly graduated from.

Meanwhile, Nathaniel Oke, Adeleke’s lawyer, faulted the judgment of the court and vowed to appeal the ruling in a higher court.

Oke argued that judge erred in law by going out of his way to source evidence to arrive at his “unjust conclusion”, while “ignoring” WAEC evidence that Adeleke possessed the certificate.

The state governorship election petition tribunal has declared Adeleke as winner of the September 2018 election in the state.

The tribunal held that the rerun election conducted in the state which saw the emergence of Gboyega Oyetola as governor, after the initial poll, was illegal.

INEC had announced Gboyega Oyetola of the All Progressives Congress (APC) as winner of the election.

But the PDP and Adeleke filed a petition at the tribunal, challenging Oyetola’s victory.