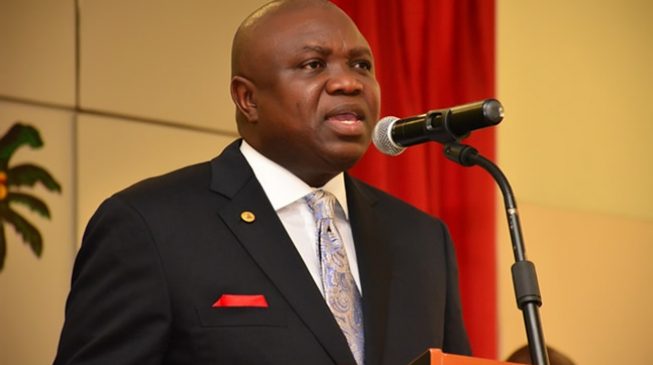 In an interview with BUSINESS DAY, Ambode said the $1.43 billion external debt stock of the state is an accumulation of loans from previous administrations, which he never added to.

He said his background as a financial expert helped him in managing the resources of the state.

Ambode said despite the fact that servicing the loans has an “immense pressure” on the internally generated revenue of the state, his administration was able to use the remaining resources of the state to embark on infrastructural development.

“Talking about Lagos state having the highest amount in terms of foreign loans, truth is that I have it on record that in my four years, I never took any foreign loan,” Ambode said.

“So, whatever it is that they are saying about having $1.43 billion is an accumulation of loans that have been taken by successive governments.

“That has immense pressure on the internally generated revenue. And when you have this pressure on the IGR that you are using to service these facilities without complaining, it means that you have been financially prudent to be able to use the remaining resources to do what you have outside there in terms of infrastructure development.

“That is the way to explain what has been happening and the value that comes with the infrastructure that we are giving.

“It is like double the price of what we are putting inside when you match the issues about loans and resources. Remember also that the country was going into recession when we came in.”

The outgoing governor added that his administration also “leveraged on the Lagos Development Plan 2012-2023 and took specific steps to improve the IGR to enable it deliver on the development plan.”

He said the monthly IGR, which used to be N12 billion when he came into power has moved up to an average of N30bn to N35bn, adding that the increment in revenue was achieved based on focus, involving improved collection machinery, expanding the tax net and an efficient civil service system.

“One of the strategic instruments in that development plan is to create a financial model for Lagos state,” he said.

“It is not enough for us to say we are having strategic pillars of development without knowing how to fund it and so in the development plan, a growth plan for revenue generation had actually been embedded in it.

“Fortunately for Lagos, you have statistics that favour revenue growth. Lagos is the commercial capital of Nigeria; the business community in terms of population or location is here and this is like 70 percent of what is happening in Nigeria..

“Remember also when we came in, the revenue that was generated on a monthly basis was about N12 billion and then it moved to almost like N20 billion.

“Today, we are having an average of N30 billion to N35 billion a month but it is not as if the expansion is based on increase in rates or taxes.

“What has been done is just improvement in collection machinery and then expanding the tax net and the ability to put people together and run an efficient civil service system that was able to tap into those things; and then more importantly, investing in technology to be able to carry out some of these collections.

“Yes, revenue has improved tremendously but obviously it is based on focus, and it is based on the ability to match those needs in terms of development and economic growth with how to fund it.