Amina Mohammed: A woman will succeed Buhari in 2023 (video) 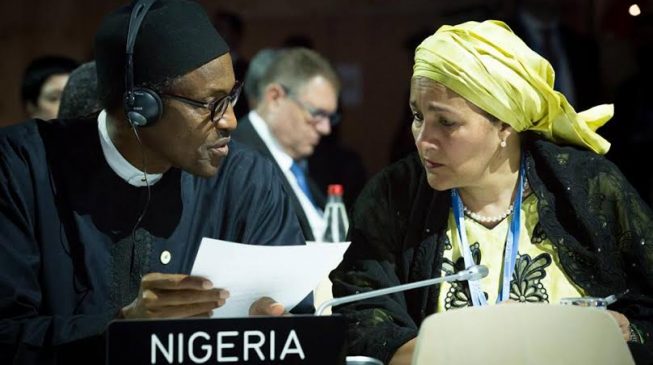 Amina Mohammed, deputy secretary-general of the United Nations, says a woman will succeed President Muhammadu Buhari in 2023.
The former minister of environment said this on Saturday at the Mo Ibrahim governance weekend in Abidjan, stating that she will be a campaign manager for the said woman.
In conversation with Mo Ibrahim, Amina Mohammed was asked when Nigeria will have a female president, she replied saying: “2023, Insha Allah”.
She was further asked if she would be running, she said: “Look, all of my life has been as a public servant and as one that serves, so that is not a problem for me.”
“But let me be truthful here, I have always thought that I am appointable and not electable. I think the political system that we have in our country, I believe in democracy, but I think the model for us, where we are is an incredibly difficult environment to say you would come to office through the will of the people.
“I think the manipulation of democracy is a very serious issue in our countries. We have a population, as I said, has a level of literacy that can be manipulated, that is not right.”

She went on to say that Buhari’s election into office was somewhat of a miracle.
“I think the fact that we got president Buhari in office this time was somewhat of a miracle, really, it is not easy to do it straight and narrow,” she added.
“I think this is a work in progress, democracy in my country is a work in progress, it is incredibly difficult, and that is why I believe that I’d make a really good campaign manager for the next woman president”.
She said “we need to start from today to get a woman in power in 2023,” stating that Nigeria deserves a woman, “deserves a leader that can take a hundred and eighty million people to where they should be”.
The 57-year-old said there’s no glass ceiling in the Nigerian political space, in stead of that “there is a concrete one”.