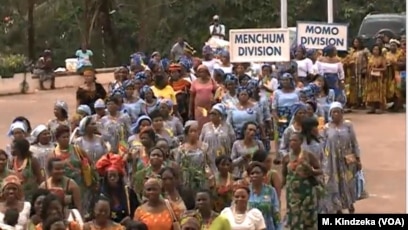 Women from the English-speaking regions march for peace in Yaounde, Cameroon, April 18, 2019.

YAOUNDE — Hundreds of Cameroonian women gathered in the capital this week to urge the government to stop the killings in the country's Anglophone separatist western regions. Weeks of violent clashes in those areas have left at least 70 people dead, VOA reports.

The event Thursday at the Yaounde conference center saw about 700 women from various cultural associations call for efforts to end fighting in the English-speaking regions.
Teacher Elizabeth Mankaa, who organized the groups, said most of the women have lost family members or belongings in battles between the military and separatists.
"The northwest and the southwest region are suffering, and we are here to cry like mothers so that the government should hear our cry and stop this crisis," she said.
Cameroon's Ministry of Defense said in a statement that dozens of separatists have been killed within the past two weeks.
The Catholic dioceses in the regions said they counted at least 70 bodies, including those of civilians and military members.
Mankaa said all of the victims were children of Cameroon, dying in what she described as a senseless war. 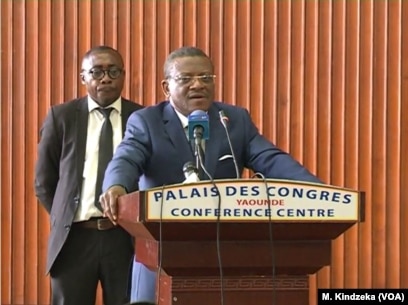 Cameroon Prime Minister Joseph Dion Ngute adresses English-speaking women in Yaounde, Cameroon, April 18, 2019.
​Government to separatists: Surrender
At a separate event Thursday, Prime Minister Joseph Dion Ngute claimed Cameroon's military is winning the fight. He called on the wives and mothers of separatists to persuade them to surrender.
"I have it on very good information that a lot of those young people out in the bushes are there in spite of themselves," he said. "They want to come out, but many do not know how to come out. Talk to them [in] a language of fraternity, that we are begging them to leave the bush because they are our own. They are our children."
Daniel Mukete, a political analyst at the Cameroon Rehabilitation Center for Victims of Conflicts, says the government cannot declare war and deploy heavily armed troops, then expect separatists to disarm.
"Let the enabling condition for an inclusive dialogue be set. Let violence [cease]. Let guns stop being heard. Let the people feel free to express their minds," Mukete said.
He added that rebel fighters will only believe that troops will not kill them if they withdraw. 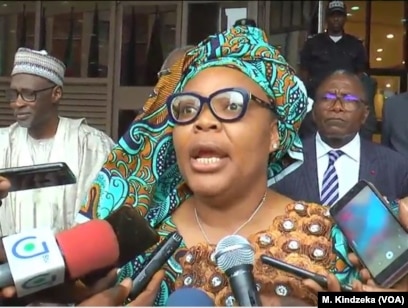 Liberian born Nobel Peace Prize winner Leymah Roberta Gbowee speaks in Yaounde, Cameroon, April 18, 2019.
​Humanitarian principles
Liberian peace activist and 2011 Nobel Peace Prize winner Leymah Roberta Gbowee was at another Yaounde-related event Thursday. She warned that Cameroon will descend into chaos if there are no talks to bring peace to the separatist regions.
"From my own experience as a Liberian, I think it is important that Cameroonians come to the place where there is consensus on humanitarian principles," she said. "When you hear stories of women using leaves for sanitary pads and people giving birth in the bushes, you know that it is time for leaders to take a step back and say we need to think about the humanity of the people."
International pressure is growing over the worsening conditions in Cameroon's Anglophone regions.
The European Union's top diplomat, Federica Mogherini, on Thursday called for talks between the government and rebels as the only way to achieve a sustainable solution.
In a speech at the European Parliament, she said the humanitarian consequences were alarming with about half a million internally displaced people and more than 32,000 Cameroon refugees registered in Nigeria.
More than 1,500 people have been killed in Cameroon's English-speaking regions since fighting broke out in 2017.
The unrest was sparked by English-speaking teachers and lawyers protesting Francophone dominance.
Armed rebels took over the movement, demanding independence for an English-speaking state they call "Ambazonia." Their demands were met with a government crackdown and calls to surrender or be killed.