The government of Comoros shut down schools, airports and public offices Wednesday as Tropical Cyclone Kenneth passed over the island nation, with wind gusts topping 200 kilometers an hour, VOA reports.


The storm, brewing in the Indian Ocean, is expected to strengthen as it heads toward the East African coast near the border between Mozambique and Tanzania.
The storm comes as Mozambique, Malawi and Zimbabwe struggle to recover from last month's devastating Cyclone Idai.
Major international aid agencies have been helping with the recovery from Idai, which struck March 14, and they now are preparing for Kenneth.
​Daniel Timme, spokesman for UNICEF in Mozambique, said the U.N. children's agency and other aid groups were "pre-positioning emergency supplies" in the country's northernmost province of Cabo Delgado, where the storm is expected to hit Thursday. 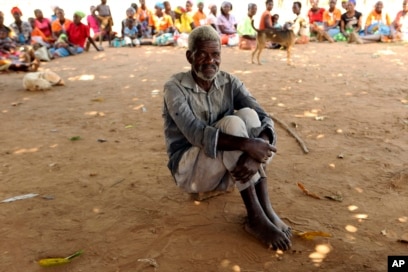 FILE - A man waits to receive food aid outside a camp for displaced survivors of Cyclone Idai in Dombe, Mozambique, April 4, 2019.
"We are currently deploying specialists in disaster response in the fields of health and child protection and water and sanitation to the province," Timme said.
He added that while Cyclone Kenneth appears to be weaker than Cyclone Idai, it remains dangerous in part because of the poverty of northern Mozambique.
Cyclones in that area "are very, very rare. And so the population is not used to these events and it's less resilient."
The current storm presents new challenges to the recovery from Cyclone Idai, whose massive flooding killed at least 800 people and displaced tens of thousands of others in Mozambique, Malawi and Tanzania.
ReliefWeb, a website on humanitarian operations, also noted that health officials have been trying to curb the spread of cholera, with more than 6,300 cases and eight deaths reported in Mozambique since Idai struck.
"Obviously, if it really hits Mozambique like we're expecting, we can expect that our own efforts will be stretched, but also the other aid agencies and the government," UNICEF's Timme said. "So it will be an additional burden."
Cyclone Kenneth comes also as South Africa battles floods and mudslides after days of heavy rain across much of the country's east. At least 51 people have died in the country. The South African weather service forecasts more heavy rain and strong winds Wednesday.