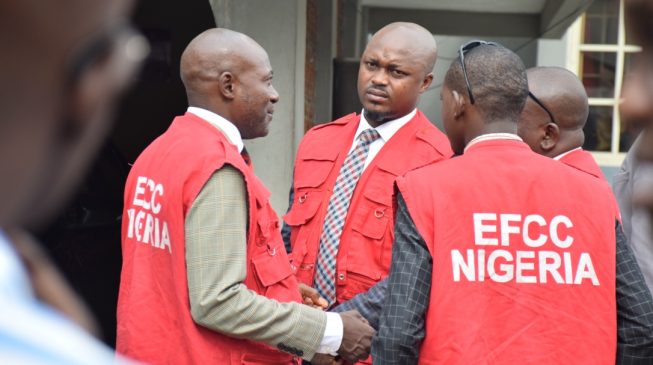 TheCable reports that the commission said 27,400 Nigerians lost N7 billion through fake promises of high returns on their investment in Dalori’s companies.
In a statement, Tony Orilade, EFCC spokesman, said Dalori was discovered to have initially paid investors 200 per cent interest on their deposits in his companies.
He said the suspect later reduced the interest to 135 per cent “before the scheme crashed in 2018.”
“Dalori, who is currently undergoing interrogation in the Commission, had incorporated the firm in 2012 with one tricycle (Keke NAPEP), which through pool investments by members of the public later boasted of 50 tricycles,” the statement read.
“The entrepreneur later diversified into other business ventures while promising mouth-watering returns to investors.
“To suck as many unsuspecting victims into his ponzi net, Dalori engaged in massive advertisements on radio and television, including a production of a movie by A-list Nollywood actors, which aimed at convincing members of the public to invest in his companies.”
The anti-graft said a victim lamented the frustrations of unsuspecting investors who can no longer get their funds back.
According to the victim, “at the moment, he has used the investors money to incorporate different entities without getting their consent. He now has Galaxy Global Energy Concept Ltd, Galaxy Miners Concept Ltd, Galaxy Global Farms, Galaxy Computers, Galaxy Block Making Factory, Galaxy Hospital and Galaxy Hotel.”
The commission accused Dalori of committing a criminal act, saying all bank accounts belonging to his company have since been frozen.
Last year, EFCC cracked down on a similar ponzi scheme shortly after the shut down of Mavrodi Mondial Movement (MMM).