EFCC: Why Ofili-Ajumogobia was re-arrested — shortly after court set her free 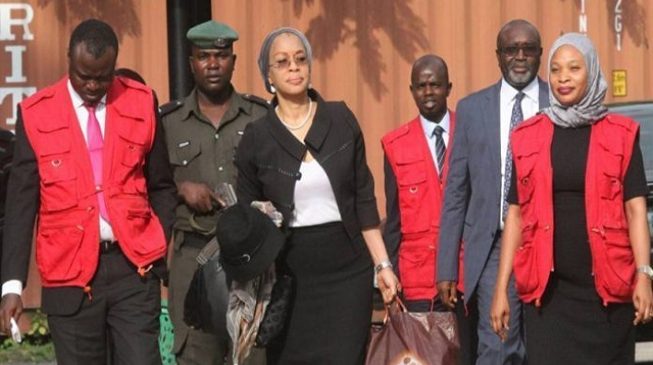 The Economic and Financial Crimes Commission (EFCC) says it re-arrested Rita Ofili-Ajumogobia, a former judge of the federal high court, in order to file a fresh criminal charge against her, TheCable outlines.

Ofili-Ajumogobia was surrounded by operatives of the commission at the court premises on Tuesday after Hakeem Oshodi, judge of a Lagos high court, struck out corruption charges against her.
In his ruling, Oshodi struck out the 31-count charge bordering on an alleged perversion of the course of justice, unlawful enrichment and forgery filed by the EFCC against Ofili-Ajumogobia and Godwin Obla, on the grounds that the court lacked jurisdiction to hear the suit.
The judge also said the EFCC did not follow the procedures set by the National Judicial Council (NJC) in disciplining erring judicial officers
Oshodi ruled that based on the judicial precedent set by the case of Nganjiwa V. FRN, the high court lacked jurisdiction to hear the suit as the EFCC “jumped the gun” in filing the first amended charge.
“As at Monday, December 11, 2017, the EFCC was aware of the decision reached by the court of appeal in Nganjiwa vs FRN,” the judge said.
“As at that date, the amended information was yet to be filed and the 12 prosecution witness was still giving evidence.”
However, in a statement on Tuesday, Tony Orilade, EFCC’s spokesperson, said in view of Oshodi’s ruling and having complied with the NJC procedure, the commission is set to prefer fresh criminal charges against the 59-year-old judge.
“The Commission re-arrested Ofili-Ajumogobia in line with the decision of the Appeal Court, Lagos Division, in a case involving Justice Hyeladzira Nganjiwa, where it said that a judge could not be prosecuted until he or she had either been dismissed or compulsorily retired by the National Judicial Council, NJC,” the statement read.
“Consequent upon the fact that the Commission had presented Justice Ofili-Ajumogobia before the NJC for disciplinary action and that the NJC had taken a position, the Commission would now approach the court to prefer fresh charges her.”
In October 2018, the NJC recommendedOfili-Ajumogobia’s dismissal over misconduct and money-laundering.
corruption trial EFCC NJC Rita Ofili Ajumogobia