EXCLUSIVE: I never took a bribe, Onnoghen defends himself before NJC (full text) 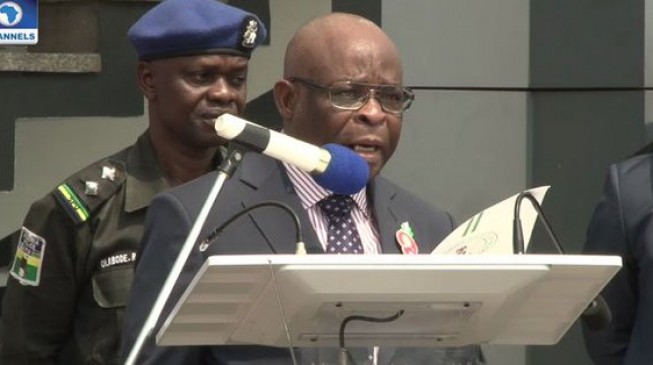 Walter Onnoghen, the suspended chief justice of Nigeria (CJN), has denied all allegations levelled against him by the Economic and Financial Crimes Commission (EFCC) before the National Judicial Council (NJC).
EFCC accused him of “financial impropriety, infidelity to the constitution and other economic and financial crimes related laws” and asked that he be punished accordingly.
This case is different from the one before the Code of Conduct Tribunal.
If the NJC upholds the allegations, Onnoghen could be removed as CJN and asked to face criminal trial.
Responding to EFCC’s petition, Onnoghen’s lawyers, R.A. Lawal-Rabana, Okon Nkanu Efut, J.U.K. Igwe, George Ibrahim, Victoria Agi, Orji Ude Ekumankama, Opeyemi Origunloye, and Temitayo Fiki, dismissed all the allegations.
In their detailed response, Onnoghen’s lawyers denied all allegations of bribery and corruption.
CLICK TO DOWNLOAD ONNOGHEN’S DEFENCE

Introduction
The Economic and Financial Crimes Commission sent two (2) petitions to the Chairman, National Judicial Council through the office of the Chief Justice of Nigeria against The Justice Walter Samuel Nkanu Onnoghen, GCON, Chief Justice of Nigeria.
The first petition is dated 4th February, 2019 vide reference EFCC/EC/GC/31/2253 while the second petition is dated 5thMarch 2019 vide reference EFCC/EC/CJN/05/59.
The petition was forwarded to the Chief Justice of Nigeria by the National Judicial Council vide a memo dated 11thFebruary 2019 reference NJC/F1/SC.3/1/570 following the 17th Emergency meeting of the Council held the same 11th February 2019.
By a response dated 19thFebruary 2019, vide reference CJN/WSN0/28/Vol.1/54, the Justice Walter S.N. Onnoghen, GCON, the Chief Justice of Nigeria reacted to the first petition.
Similarly, by a response dated 11th March 2019 vide reference CJN/WSN0/28/Vol.1/83, His Lordship reacted to the further This written address covers the petitions and is in support of the Respondent’s position that the petitions dated 4thFebruary 2019 and 5th March 2019 are without merit and ought to be dismissed.
2.1  Statement of Facts
Having commenced hearing on 14th March 2019, the prosecution called 7 (seven) prosecution witnesses while the defence called three (3) witnesses including His Lordship, the Honourable Chief Justice of Nigeria. Hearing ended on Tuesday 26th  March 2019. The Honourable Committee directed the learned Counsel for both the Prosecution and the Defence to file written addresses and serve each other as well as the Committee. This is the written address on behalf of the Respondent.
3.0 THE SECOND PETITION DATED 5TH MARCH, 2019
4.0 ISSUES FOR DETERMINATION
The defence submits, that the sole issue for determination is, WHETHER BASED ON FACTS BEFORE THE COMMITTEE THE PETITIONER HAS ESTABLISHED ANY MISCONDUCT IN THE PERFORMANCE OF HIS JUDICIAL FUNCTION?
5.1 FRESH ALLEGATIONS CONTAINING VERY MALICIOUS AND SPECULATIVE SUBMISSIONS TO THE NATIONAL JUDICIAL COUNCIL BY THE PETITIONER
This Honourable Committee will, very graciously observe that the second petition dated 5th March 2019, vide reference EFCC/EC/CJN/05/95 was submitted to the office of the Chief Justice of Nigeria on 5th March 2019 at 30 p.m during the hearing of the first petition by this Honourable Committee. The Honourable Committee is urged to confirm whether this petition went through preliminary assessments as provided by Rules 17 and 18 of the Judicial Discipline Regulations 2017. If it did not, then the petition is incompetent. Be that as it may, the Respondent effectively responded to all the issues raised by this second petition and cleared all the malicious and speculative issues raised by the prosecution as evident from the following:
5.3  APPEARANCE OF JOE AGI IN SUIT NO. SC/3/2010 AND ALLEGED RECEIPT OF MERCEDES BENZ GL 450 VALUED N7,000,000.00 FROM JOE AGI, SAN
As this Honourable Committee graciously observed during the hearing of the petition, the Suit SC/3/2010 is the consolidated suit Nos SC.3/2010, SC.51/2010 and SC.54/2010. It is reported in [2010] 19 NWLR (Part 1226) 172.
The law report contains the entire history of the As evident at pages 208 and 209 of the law report, Joe Agi, SAN was neither Counsel nor did he appear for any of the parties at the High Court and Court of Appeal. In the Supreme Court, Joe Agi, SAN was one out of 12 Counsel who appeared for the Appellants in the Supreme Court (please see, p.207 and 208 of the law report) or the appearances page of the electronic law report submitted by the petitioner themselves. In order of seniority, Joe Agi SAN was the fifth (5th) Senior Advocate for the Appellants. In other words, he appeared as a junior to 4 other Senior Advocates in the matter.
Mahmud Mohammed, JSC (as he then was), later CJN presided over the Other members of the Panel were: Walter Samuel Nkanu Onnoghen, JSC (as he then was, now CJN), Francis Fedode Tabai, JSC, Ibrahim Tanko Muhammad, JSC and Christopher Michell Chukwumah-Eneh,   JSC.   Accordingly,  the  Hon.   Justice
W.S.N. Onnoghen was only one out of the 5 member Panel of the Supreme Court.
6.1  Alleged Receipt of Pecuniary Gifts
In paragraph (iii) at page 2 of its second petition dated 5thMarch 2019, the petitioner alleged that His Lordship received pecuniary gifts from the following and on the following
7.1 Alleged Linkage of the Gifts to Cases Before the Supreme Court
7.9 Another case which the learned counsel for the Petitioner linked to the gifts by Paul Usoro, SAN was SC.27/2010. Research shows that the case is reported as [2011] 8 N.W.L.R. (pt 1248) 321. It is the case ofAttorney-General, Rivers State V AG, Akwa Ibom & Anor.
8.1 ALLEGATION OF RECEIVING ESTACODES IN US DOLLARS –

9.1  ALLEGATION OF CONVERTING PUBLIC FUNDS UNDER GUISE OF ESTACODES FOR THE WIFE OF THE CJN – ABSENCE OF MERIT
10.1 RECEIPT OF CERTAIN AMOUNT OF MONEY FROM THE CHIEF PROTOCOL OFFICER
Nothing shows that the Honourable justices return funds given to them for the tickets except in respect of trips they did not eventually undertake.
In respect of items (i) & (vii) I am accused of receiving  If the petitioners are after the truth, they should ask for and  make  available  to  the  panel,  a  comprehensive record of payments and for air tickets and estacodes to all Justices of the Supreme Court and Chief Justices of Nigeria for you to see whether I Have done anything outside the practice I cane to meet in the Court.
11.1 Conclusion
For Service On
Counsel For the Petitioner
Economic and Financial Crimes Commission Rotimi Oyedepo, Esq
rotimi-oyedepo@yahoo.com