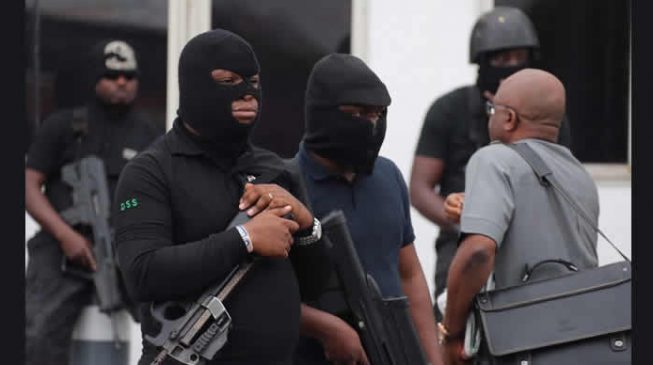 THE CLAIM: Various news websites recently reported that Adamu Yusuf, a retired brigadier general, tipped off the federal government in 2015 on $2 billion looted funds and gold bars allegedly stashed in the Abuja home of Mohammed Bello Adoke, former minister of justice and attorney-general of the federation. The money and gold were said to have been recovered by the Department of State Services (DSS) but “re-looted”, with no payment to Yusuf for whistle-blowing.

BACKGROUND: Reports first emerged in 2016 that the secret police had raided the house of Adoke, who is on self-exile and found “billions of naira” but claimed to have recovered only gold trinkets and $20,000. The recovered funds were said to have been stolen by “aides of President Muhammadu Buhari”. The identity of the whistle blower was not revealed. The matter seemed to have died thereafter.

However, a website recently interviewed Yusuf who identified himself as the whistle-blower. He said he was the one that tipped off Abba Kyari, chief of staff to the president. The DSS conducted a raid and made the recoveries “over a period of three days” because of the amount involved, according to Yusuf, who said he did not hear from Kyari again despite “promises of compensation”.

Yusuf was quoted as saying: “I got very reliable information from a friend, Hon. Chuma Nzeribe, that money was stashed in Flat 6, Block 1 (NNPC Quarters, Area 11, Garki, allegedly owned by former Attorney-General and Minister of Justice, Mr Bello Adoke.) Subsequently, my contact in the Villa immediately introduced me to Abba Kyari (Chief of Staff to the President).

“I met with Abba Kyari… I told him emphatically that the people involved who have provided the information to expose where the money was kept need to be compensated. The Chief of Staff agreed with me totally. In fact, he promised that 20 percent would be given to them.

“After getting the information, he mobilized the Director General of the Department of State Services (DSS), Lawan Daura, who led the operation to recover the money. I was told it took them about three days to evacuate over the money denominated in dollars including gold bars. After the successful operation, Kyari called and thanked me. After that [he] became incommunicado.”

He said he later met with Babagana Monguno, the national security adviser (NSA) and a retired major general, who took him to President Muhammadu Buhari and mentioned the incident to the president. But he did not hear anything again, either from Buhari or Monguno. Yusuf’s interview has gone viral, and was a subject of phone-in programme on the popular Human Rights Radio (Berekete), Abuja.

CORRECT: TheCable has investigated and verified that certain aspects of the story are true, but some of the claims are not true. Highly placed sources told TheCable it is true that Yusuf tipped off Kyari. It is also true that the DSS raided a house in Garki. It is also a fact that Monguno took Yusuf to meet with Buhari when the retired brigadier complained that the recovered funds had been re-looted.

INCORRECT: According to presidency sources, when Yusuf met with Buhari and complained that billions were found in Adoke’s house and stolen by the DSS, and that he was not given the 20 per cent promised by Kyari, the president sent for Daura, the DSS director-general at the time, and confronted him with the allegations.

“The good thing is that DSS normally records its operations, so Daura simply played back the video to the president. The operatives found only $20,000 and trinkets. There were no gold bars and no $2 billion or N2 billion. The president did not act any further when he saw the evidence. In fact, the trinkets were returned to Otunla’s family,” a DSS official, speaking on the condition that he would not be named, told TheCable.

Kyari was contacted by TheCable for his response but he declined.

EXAGGERATION? Although there have been reports of mind-boggling recoveries by state agencies in the fight against corruption, there is none yet of $2 billion being recovered from a single location. The money was said to have been from the Malabu scandal, but the entire payment made by Shell/Eni for OPL 245 was $1.3 billion, out of which $210 million was to the federation account and the rest to Malabu Oil and Gas, the original owners of the oil block. Even if the money was N2 billion (as claimed in some other reports), it would still amount to an exaggeration to say it took “three days” to evacuate the funds and the gold bars.

CONCLUSION: TheCable has confirmed that the house is owned by Otunla and not Adoke, although the “AGF” title both used while in office might have caused the mix-up. It was also confirmed that DSS presented video evidence to Buhari as proof that its operatives did not recover N2 billion or $2 billion and “gold bars”. This puts the other allegations of re-looting the funds on very shaky grounds.