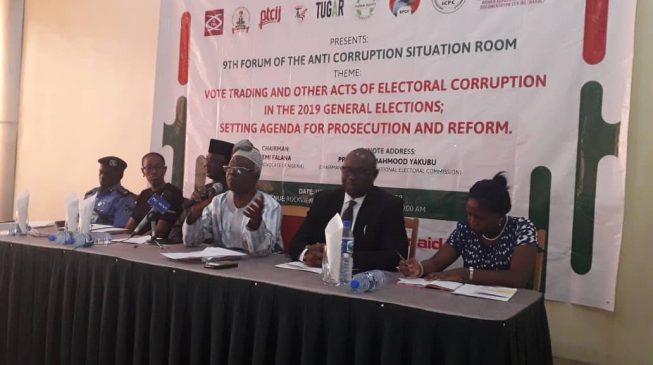 Femi Falana, human rights lawyer, says the courts have legitimised vote buying.
Speaking on Wednesday at the ninth forum of the anti-corruption situation room in Abuja, Falana said since 1999, the purchase of votes has been the order of the day.
He said measures should be put in place in a bid to reform the country’s process “in a way that we will not be all collectively disgraced.”
The event was organised by the Human and Environmental Development Agenda (HEDA) in collaboration with the Economic and Financial Crimes Commission (EFCC) and Independent Corrupt Practices and other related offences Commission (ICPC) and some civil society groups.
“Unfortunately, under the current political dispensation, our courts have legitimised vote-buying and other violations of the provisions of the electoral act,” Falana said.
“I will refer to few cases. In the case of Falae and Obasanjo, in 1999, it was proved in the court of appeal that bags of rice, salt and garri were distributed to entice voters for the candidate of the ruling party, general Olusegun Obasanjo.
“The court of appeal so found such infraction of the law, however it turned round to say even those distributing were said to be PDP stalwarts, the court of appeal said it was not proven that there were winners of the election.
“Since then, the purchase of votes, bribing of voters have been the order of the day.
“The battle ahead is how we are going to reform the democratic session in a way that we will not be all collectively disgraced. We have never gone this low where publicly people are trading in votes. We never went that low.”
Mahmood Yakubu, chairman of the Independent National Electoral Commission (INEC), said vote buying comprises the free choice of the voter.
Yakubu, who was represented by Festus Okoye, national commissioner, urged the national assembly to clearly define what vote buying is and provide stiff sanctions.
TheCable
Femi Falana HEDA vote-buying