FLASHBACK: How EFCC busted syndicate of illegal gold miners in Zamfara in 2018 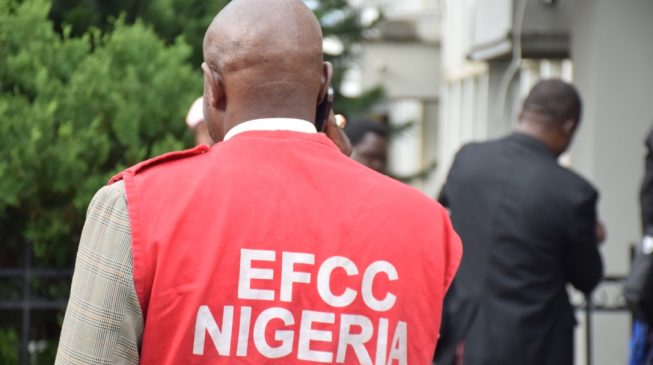 The government said it got intelligence that the rising case of banditry is linked to gold mining in the state. Many lives have been lost while properties destroyed in Zamfara. The news of illegal mining in the state did not start all of a sudden. In 2018, operatives of the Economic and Financial Crimes Commission (EFCC) busted a syndicate of illegal gold miners in the gold-rich state. The miners were digging out the precious commodity and exporting to clients in the United Arab Emirates.

Gold wor th as much as $1 billion was seized from some of the suspects during an operation at the Nnamdi Azikiwe International Airport in October.

The gold rush in Zamfara reportedly started in 2009, after a spike in the price of gold. Farmers who barely survived on $1 or $2 a day were suddenly making $15 or more every day. This attracted more people into the illegality.

The EFCC had named one AbbaYahaya as the brain behind the deal. The gold seized at the airport  was said to have been handed over to the suspect by a syndicate of illegal miners operating in Zamfara.

Through the information gathered from the suspect arrested in Abuja, the anti-graft agency went after the gang in Zamfara.

“The anti-graft agency is already on the trail of four members of the said syndicate said to have perfected ways of beating security agencies at the nation’s airports,” the EFCC had said.

“According to a document sighted by our correspondent, “the suspect was caught following a tip off after he had managed to pass through all the screening machines without being caught.

“He was in possession of N1.1b worth of gold while travelling alone to meet with the Dubai end of a ring of buyers of illegal miners. Being illegally in possession of the gold was a violation of Minerals and Mines Act.

“The EFCC is already on the trail of four suspects connected with massive illegal mining activities in Zamfara and exportation of mines. Preliminary evidence has linked the suspect with a miner in Zamfara.”