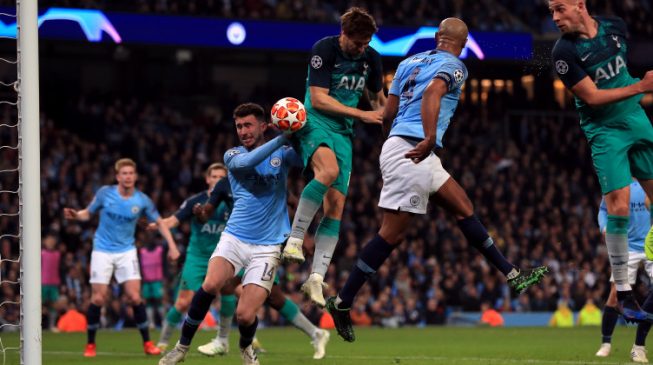 Tottenham qualified for their first ever Uefa Champions League semi-final courtesy of the away goal rule despite losing 4-3 at Manchester City, TheCable is reporting.

With a slender 1-0 lead from the first leg, Mauricio Pochettino’s men bravely withstood the City onslaught with three away goals and had VAR to thank for awarding their third, while also ruling out a fifth City goal deep into added time.

In a scintillating game at the Etihad stadium, City took the lead in the third minute through Raheem Sterling’s brilliant curling shot, but 17 minutes later, there had been four more goals- a record in a UCL game.

Tottenham grabbed two of those goals through Heung-Min Son, who became the highest scoring Asian player in the Champions League on 12 goals to give the Spurs a 2-1 lead.

Pep Guardiola’s men responded with two of their own from Bernardo Silva and Sterling- again- to retake a 3-2 lead. Normalcy returned after the frenetic first 20 minutes and Tottenham hung on to dear life at halftime, leading the tie on away goals rule.

Man City, however, destroyed that advantage with a lethal Sergio Aguero strike on 59 minutes, the Argentine blasting in at the near post to give the Qatar-backed Manchester club an outright lead on aggregate in the two-legged encounter.

Tottenham, refused to roll over for City, and their determination saw them restore their advantage through Fernando Llorente’s bundled effort from a corner kick which seem to come off his arm before going over the line.

However, the referee, after reviewing the incident himself, allowed the goal to stand.

There was to be some final drama in added time when Raheem Sterling thought he had completed his hat-trick after he was put through by Aguero, with Guardiola and the whole stadium erupting in the moment.

The joy was, however, short-lived as the Argentine striker, Aguero, was correctly ruled to be in an offside position by VAR as he latched on to the ball.

The final whistle saw a visibly crestfallen Guardiola who went straight off the bench to the dressing room after another season of European disappointment, while Spurs’ team celebrated.

Liverpool also joined in on the celebration with an easy 4-1 win over Porto in Portugal to win 6-1 on aggregate. Their lethal front three of Sadio Mane, Mohamed Salah and Roberto Firmino all scored in that order.

The Reds will square up against Barcelona in the semis, while Tottenham will be the next team to try and stop the attacking juggernaut of Ajax Amsterdam.