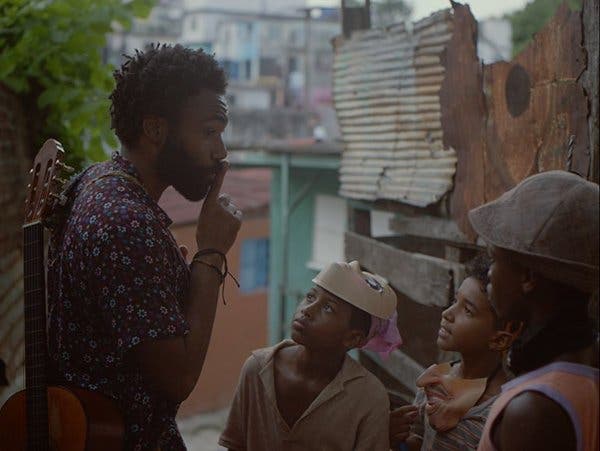 Childish Gambino in a scene from “Guava Island.”CreditCreditAmazon Studios

When Donald Glover and the director Hiro Murai collaborate on a new project, expectations are naturally sky high.

After all, Murai has directed many of the key episodes of Glover’s Emmy-winning series, “Atlanta,” as well as the music video for “This Is America,” the Grammy-winning song Glover recorded as his musical alter ego, Childish Gambino.

But with their first feature-length effort, “Guava Island,” you had the sense that Glover and Murai were trying to play down those expectations. The film, which comes in at a brisk 54 minutes, was shot in Cuba last year and kept under wraps until this week. That isn’t easy to do when your star is so famous and his love interest is played by Rihanna.

And though any film festival in the world would have coveted Murai’s first feature, “Guava Island” instead debuted Thursday night at the Coachella campgrounds in California, where Glover will headline the site’s music festival as Childish Gambino. Shortly after his set concludes on Friday night, the film is to begin streaming on Amazon, starting Saturday at 12:01 a.m. Pacific Daylight Time.

So what is this mystery project about? “Guava Island” is a music-driven fable that follows Deni (Glover), a happy-go-lucky singer who believes that music has the power to unite the squabbling citizens of his tiny island. He promises his girlfriend, Kofi (Rihanna), that he can write a song as beautiful as she is, though Kofi is skeptical. “No song is that beautiful,” she boasts.

The plot is slight: A shady island tycoon named Red (Nonso Anozie) tries to prevent Deni from putting on a music festival, reasoning that if people go see the young man perform that night, they’re liable to skip work at Red’s sweatshops the next day. And though Rihanna doesn’t have much to do as Glover’s girlfriend, the two at least share a spiky chemistry: Glover is eager to please, while Rihanna remains ever hard to impress.

But the main attraction here is something that had been kept secret until Thursday night’s screening: Glover uses “Guava Island” to restage and remix some of his biggest recent songs.

“America is a concept,” Deni tells his fellow workers before leading them in a rendition of “This Is America” that finds new context for many of the video’s familiar, unsettling dance moves. Other musical sequences are set to Childish Gambino songs like “Saturday” and “Summertime Magic,” which is repurposed as a beachside serenade for Rihanna. (Alas, she is a mere spectator instead of Glover’s duet partner.)

Glover has said that “Guava Island” was inspired by films as disparate as “Purple Rain” and “City of God,” though it also shares a restless creative ambition with recent visual albums from Janelle Monáe and Beyoncé. Monáe will perform just before Glover on the Coachella stage Friday night, while Beyoncé dominated the festival last year with a career-spanning performance captured for her coming Netflix documentary “Homecoming.”

For top-tier artists looking to make a grand statement, there remains no place like Coachella. But as “Guava Island” shows, sometimes you can say just as much about your intentions by springing a sly surprise on the way.