'I Am Not for Sale,' Say Nigerian Women in Anti-trafficking Campaign

DAKAR — Nigeria's anti-trafficking agency is trying a new approach to preventing women's exploitation abroad by sharing inspirational stories of women who made it at home, it said on Monday.

The “Not for Sale” campaign was rolled out last month with posters, TV and radio adverts in which women talk about how they were tempted by Europe but instead pursued their dreams and found success in Nigeria.
They end with the statement "I am not for sale."
Thousands of Nigerian women and girls are lured to Europe each year by the promise of work, but end up trapped in debt bondage and forced to sell sex, the United Nations says.
Most prevention campaigns in Nigeria have focused on the horror stories and dangers of trafficking, but this has proved ineffective, said Richard Sandall of Britain's Department for International Development (DFID), which is supporting the campaign.
"As we were developing this proposal we began to hear stories that actually these negative stories were almost reinforcing the urge to go," said Sandall, who works on anti-slavery activities in Nigeria.
Sandall said suffering was seen as a kind of sacrifice or rite of passage.
"We wanted to create a different narrative. We don't know if it's going to work," he told the Thomson Reuters Foundation. 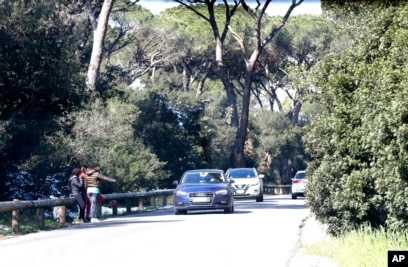 Silvia, Cherin, Giulia, from Nigeria, work in the Castel Porziano wood, in the outskirts of Rome, Feb. 27, 2018. Nigerian teenagers and young women selling sex is a common sight for motorists in Italy.
The campaign includes a website with links to women's empowerment groups, job sites and entrepreneurship programs, and a form where people can submit their own success stories.
"When I finished secondary school, things were so tough for my family that when my friend suggested crossing to Europe to make some money, I was tempted," writes a woman named Gladys.
"But I'd also heard of what many do to make it... and I didn't want to be treated like a slave," she says in one of the featured stories. She is now a fashion designer.
One activist said she feared the campaign could be ineffective.
"It's not that people who were trafficked haven't considered opportunities at home," said Anna Sereni of Anti-Slavery International.
"Instead, it's the lack of those opportunities and desperation for better lives that pushes people into taking these risky decisions to travel into the unknown," she said.
Julie Okah-Donli, head of Nigeria's anti-trafficking agency NAPTIP, said she thought the campaign had great potential.
"We hope to achieve empowerment of victims and potential victims of trafficking, which is key, and to also put out information about opportunities in the country to show there are better alternatives," she said.