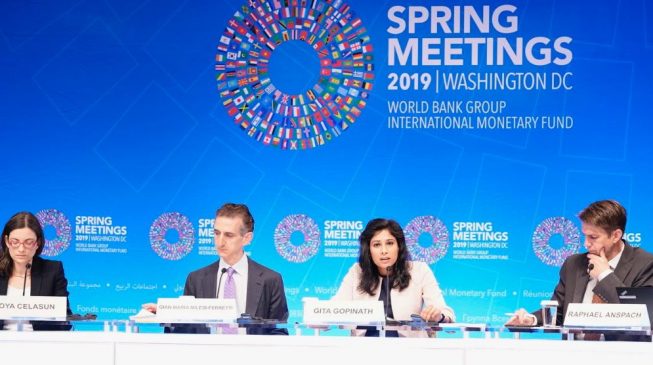 The International Monetary Fund says Nigeria’s economy will expand a little faster than its earlier projection.

In the World Economic Outlook report released on Tuesday at the ongoing spring meetings of the IMF and World Bank Group, the fund said Nigeria’s economy will grow by 2.1% in 2019, an increase of 0.1% points from the 2% projection given in January.

In the WEO update released in January, the fund had cut its growth projection for Nigeria’s economy from the 2.3% contained in the October 2018 report to 2% blaming softening oil prices.

“The projection is 0.3 percentage point and 0.2 percentage point lower for 2019 and 2020, respectively, than in the October 2018 WEO, reflecting downward revisions for Angola and Nigeria with the softening of oil prices.

“Growth prospects for commodity exporters are weighed down by the soft outlook for commodity prices, including for Nigeria and Angola, where growth is expected to reach about 2.6 percent and 3.9 percent, respectively, in the medium term.”

Speaking on the projection, Oya Celasun, the chief of the World Economic Studies division of the IMF’s research department, said Brexit and softening oil prices are the main risks to Nigeria’s economy in the short term.

“Brexit and softening oil prices are the main risks for Nigeria,” she told TheCable

“We expect a growth recovery, growth was reasonably strong last year and we think that things will improve a bit going forward.”