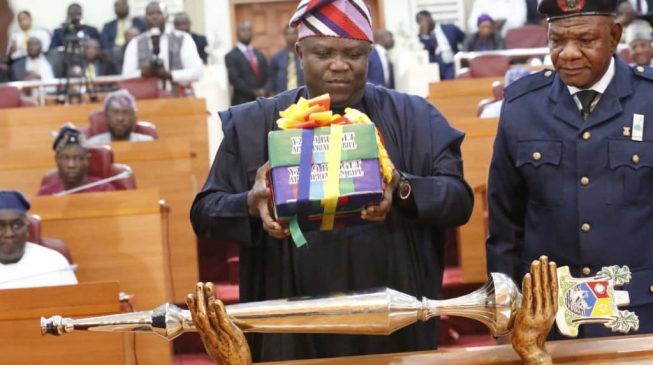 The Lagos state house of assembly, on Monday, passed the state’s 2019 appropriation bill of N873.532 billion for 2019, barely a month to the end of Governor Akinwunmi Ambode’s tenure.

In a report seen on TheCable the approval came more than 80 days after the governor presented the appropriation bill of N852.316 billion on February 5, to the state assembly.
The passage followed the adoption of the report and recommendations of the house committee on budget and economic planning, headed by Gbolahan Yishawu (APC-Eti-Osa II).
The house approved N393,841,387,020 from the consolidated revenue fund for recurrent expenditure and N479,691,073,705 from development revenue fund for capital expenditure.
The budget size thereby totalled N873,532,460,725 which is N21.216 billion higher than the budget size presented by Ambode.
Mudashiru Obasa, the speaker of the house, commended Yishawu and members of his committee for a thorough scrutiny of the budget.
“That a bill for a law to authorise the issue and appropriation of N393,841,387,020 from the Consolidated Revenue Fund for recurrent expenditure and N479,691,073,705 from Development Fund for capital expenditure thereby totalling a budget size of N873,532,460,725 for the Year ending 31st December, 2019 be passed into law,” Obasa said.
The house passed the bill into law after Obasa had conducted a voice-vote on each of the allocations for ministries, departments and agencies.
Obasa directed Azeez Sanni, the clerk of the house, to send a copy of the bill to Ambode for his assent.
The 2019 budget is N287.68 billion lesser than that of 2018, which stood at N1.04 trillion.
The budget has a capital expenditure of N462.757 billion and a recurrent expenditure of N389.560 billion.
The capital to recurrent ratio of the budget stood at 54:46.